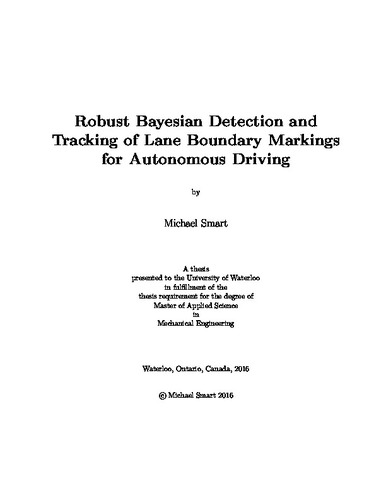 Lane detection is a fundamental and challenging task in autonomous driving and must be performed safely and robustly to avoid catastrophic failures. Current methods do not perform effectively in the challenging scenarios arising from degraded or worn lane markings and preclude the broader deployment of autonomous driving technologies. Additionally, many methods lack provisions for safe failures, and will return false positive detections as the strongest lane marking candidate instead of declaring that no lane marking was found. This work proposes several changes to the current state of the art in robust lane de- tection and tracking and builds on existing methods using Dynamic Bayesian Networks with heuristic features. A new training approach is proposed for learning heuristic fea- ture distributions from unlabelled data with greatly reduced sensitivity to initialization. The null hypothesis is then reformulated to provide a fail-safe so that in the absence of a successful detection, the lane detection system will be able to declare a detection failure instead of producing a high-risk false positive. The Bayesian Inference formulation used in the current state of the art is then generalized to support different lane marking config- urations. Lastly, a stereo threshold filter is proposed as a method for reducing dangerous false positives caused by out-of-plane features. The proposed methods were tested against several datasets, including the new WAterloo Representative Roads (WARR) dataset, covering a 40 km route around the Waterloo region captured at 3 Hz. When tested against the KITTI dataset, the proposed stereo filter has a negative predictive value of over 95% and provides a dramatic reduction in dangerous false alarms. The proposed detection method is effective in scenarios that match the expected single-lane road model and fails safely in 84% of the scenarios that do not adhere to the expected model. Of the dangerous failures, approximately 90% were model failures and may be corrected through use of a different detector within the proposed generalized form that is more compatible with the failure scenario. Such a reduction in model failures could dramatically reduce the rate of potentially dangerous failures and represents a significant improvement on the state of the art.