Long-lived Anatexis in the Exhumed Middle Crust from the Torngat Orogen and Eastern Core Zone: Constraints from Geochronology, Petrochronology, and Phase Equilibria Modeling 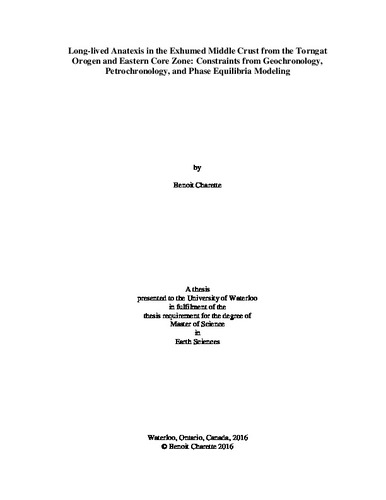 The Torngat Orogen (southeastern Churchill Province, Canada) is a transpressional Paleoproterozoic orogen resulting from the collision between the North Atlantic Craton and the Core Zone (an Archean micro-continent) during the larger-scale Trans-Hudson Orogeny. The doubly-vergent Torngat Orogen is mainly exposed as granulite-facies metamorphic rocks and migmatites within a narrow (~150 km) belt. High-T metamorphic mineral assemblages (sillimanite stability field) are regionally overprinted by amphibolite-facies, high-strain, strike-slip shear zones. The development of granulite-facies metamorphic conditions, extensive anatexis, and intense shear deformation in such a narrow region is anomalous even for transpressional and hot orogens (such as Paleoproterozoic orogens during the “Archean-type” to “modern-type” tectonic transition). Recent field observations indicate that anatexis also occurred in the adjacent eastern Core Zone, thus shedding doubt on the true spatial extent of Torngat metamorphism and therefore on the dimensions and shape of the orogen. Here, thermobarometry, phase equilibria modeling, and geochronology were used to investigate the timing, extent, and significance of metamorphism in the western Torngat Orogen and eastern Core Zone. The results reveal that the Torngat Orogen is larger, older, and longer-lived than previously thought. Multi-equilibria thermobarometry and phase equilibria modeling highlight a continuous increase in metamorphic conditions from the Core Zone to the Torngat granulites with no evidence of a major metamorphic break. Close-to-peak metamorphic conditions, constrained from mafic samples, gradually increases from 8.7 kbars-814°C to 10.8 kbars-914°C from west to east. Melt crystallization conditions, defined from metasedimentary rock samples, are estimated at 5.4 kbars-709°C to 8.1 kbars-823°C from west to east. Rocks from the Core Zone and Torngat Orogen appear to have followed hairpin P-T paths in the sillimanite stability field. Metamorphic zircon U-Pb ages, monazite U-Pb ages, and garnet Lu-Hf and Sm-Nd ages are consistent in both domains, confirming that the eastern Core Zone was significantly reworked during the Torngat Orogeny. Zircon and monazite ages suggest protracted metamorphic crystallization from c. 1885 to 1780 Ma. Crystallization events at c. 1860-1840 Ma and c. 1820-1800 Ma are interpreted as indicators of transpressional deformation (limited to the Torngat granulitic domains) and melt crystallization that was contemporaneous over the study area, respectively. Lu-Hf garnet geochronology reveals that garnet growth had begun by 1955-1885 Ma, potentially making the orogen at least 15 Myr older than previously thought. P-T-t-D paths support a peak-to-retrograde evolution characterized by a medium dP/dT slope (geotherm-parallel) without isothermal decompression. After peak metamorphic conditions were reached by 1885-1840 Ma, both domains stayed at suprasolidus conditions until 1820-1800 Ma. In light of these results, we suggest that the Torngat Orogeny produced a large mid-pressure, high-temperature terrain with crustal-scale partial melting. The entire area represents a down-to-the-east mid-crustal section that was mainly exhumed through denudation. The long duration of mid-pressure and high-temperature metamorphism in this region may be explained by its position on the eastern flank of the Ungava indentor (oblique convergence) and by the high thermal state of the lithospheric mantle. The Torngat Orogen may be intermediate between ultra-hot orogens and hot orogens, where decoupling between the hot lithosphere and crust is responsible for large-scale penetrative deformation (vise model).