Aspects of Nonlocality: from Particles to Black Holes 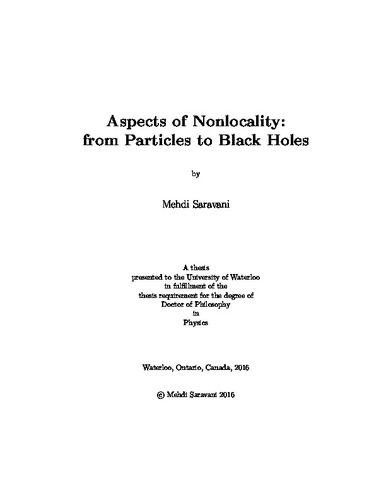 This dissertation is a collection of works on different aspects of the following subjects: causal set--continuum correspondence, wave propagation on causal sets, nonlocal quantum field theory, potential connection between dark matter and quantum gravity and causal structure of black holes in Lorentz violating gravitational theories. We present two results which concern certain aspects of the question: when is a causal set well approximated by a Lorentzian manifold? The first result is a theorem which shows that the number-volume correspondence, if required to hold even for arbitrarily small regions, is best realized via Poisson sprinkling. The second result concerns a family of lattices in 1+1 dimensional Minkowski space, known as Lorentzian lattices, which we show provide a much better number-volume correspondence than Poisson sprinkling for large volumes. We argue, however, that this feature should not persist in higher dimensions and conclude by conjecturing a form of the aforementioned theorem that holds under weaker assumptions, namely that Poisson sprinkling provides the best number-volume correspondence in 3+1 dimensions for spacetime regions with macroscopically large volumes. We then study wave propagation on a background causal set. We introduce a family of generalized d'Alembertian operators in D-dimensional Minkowski spacetimes which are manifestly Lorentz-invariant, retarded, and non-local. The prototypes of these operators arose in earlier work as averages of matrix operators meant to describe the propagation of a scalar field in a causal set. We generalize the original definitions to produce an infinite family of ''Generalized Causet Box (GCB) operators'' parametrized by certain coefficients, and we derive the conditions on the latter needed for the usual d'Alembertian to be recovered in the infrared limit. The continuum average of a GCB operator is an integral operator in Minkowski, and it is these continuum operators that we mainly study. To that end, we compute their action on plane waves, or equivalently their Fourier transforms g(p) [p being the momentum-vector]. For timelike p, g(p) has an imaginary part whose sign depends on whether p is past or future-directed. For small p, g(p) is necessarily proportional to p.p, but for large p it becomes a constant, raising the possibility of a genuinely Lorentzian perturbative regulator for quantum field theory in Minkowski. We also address the question of whether or not the evolution defined by the GCB operators is stable, finding evidence that the original 4D causal set d'Alembertian is unstable, while its 2D counterpart is stable. Following our earlier work on wave propagation on a causal set, we study the quantum theory of a massless scalar field whose evolution is given not by the the d'Alembertian, but by an operator which is Lorentz invariant, reduces to d'Alembertian at low energies, and defines an explicitly retarded evolution. This modification results in the existence of a continuum of massive particles, in addition to the usual massless ones, in the free theory. When interactions are introduced, these massive or off-shell quanta can be produced by the scattering of massless particles, but once produced, they no longer interact, which makes them a natural candidate for dark matter which we dub off-shell dark matter (OfDM). Finally, we generalize this idea to massive scalar fields too. We then consider phenomenological predictions of OfDM model in the context of cosmology. OfDM particles rate of production is suppressed by the scale of nonlocality (e.g. Planck length). As a result, we show that OfDM is only produced in the first moments of big bang, and then effectively decouples (except through its gravitational interactions). We examine the observational predictions of this model: In the context of cosmic inflation, we show that this proposal relates the reheating temperature to the inflaton mass, which narrows down the uncertainty in the number of e-foldings of specific inflationary scenarios. We also demonstrate that OfDM is indeed cold, and discuss potentially observable signatures on small scale matter power spectrum. Finally, we explore the validity of Cosmic Censorship conjecture in Lorentz violating theories of gravity. Is Cosmic Censorship special to General Relativity, or can it survive a violation of local Lorentz invariance? Studies have shown that singularities in Lorentz violating Einstein-Aether (or Horava-Lifshitz) theories can lie behind a universal horizon in simple black hole spacetimes. Even infinitely fast signals cannot escape these universal horizons. We review this result and extend it, for an incompressible aether, to 3+1D dynamical or spinning spacetimes which possess inner Killing horizons, and show that a universal horizon always forms in between the outer and (would-be) inner horizons. This finding suggests a notion of Cosmic Censorship, given that geometry in these theories never evolves beyond the universal horizon (avoiding potentially singular inner Killing horizons). A surprising result is that there are 3 distinct possible stationary universal horizons for a spinning black hole, only one of which matches the dynamical spherical solution. This motivates dynamical studies of collapse in Einstein-Aether theories beyond spherical symmetry, which may reveal instabilities around the spherical solution.