The Influence of Weather and Climate Change on Pedestrian Safety 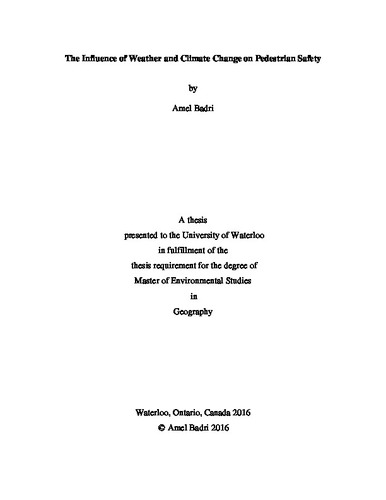 Although walking is one of the most sustainable means of transportation with a number of related health benefits to human life, in a number of regions, walking on roads can lead to increased chances of injury and death from a collision. Due to the dramatic growth in motor vehicle usage, pedestrians are easily susceptible to collisions with these vehicles. This problem is even more enhanced when inclement weather occurs. Pedestrian vulnerability is more heightened during weather hazards, since such hazards tend to increase the risk of collisions. The influence of weather hazards on motor vehicle safety and collision risk is established in the road safety literature, but fewer research exists on the safety and risk of pedestrian-vehicle collisions during inclement weather. Therefore, the first objective of the thesis is to estimate the relative risk of collisions during rainfall in two urban Canadian Regions: the Greater Toronto Area and Greater Vancouver. The second objective is predictive in nature using a combination of the relative risk estimates and available climate models to understand the possible influence of climate change on pedestrian safety in both regions by the mid-century. The results indicated that present-day relative risk of collisions during rainfall relative to dry weather is higher for pedestrians in Vancouver than Toronto, however, at a finer temporal scale the relative risk is almost the same for both regions. By mid-century, the results of the climate modeling exercise estimate an increase in mean annual rain days for both regions, where much of the increase is for light rainfall days. This additional increase in mean annual rain days will increase pedestrian collisions each year by a small amount in Toronto and by a slightly higher amount in Vancouver. In both regions, collisions occurring at public intersections and casualties have significant increase in risk during rainfall. Moreover, with climate change, the additional collisions are belonging to public intersection collisions and casualties in Toronto and Vancouver, respectively. Evidently, most of the increase in risk and additional collisions by mid-century is attributable to moderate and heavy rainfall periods. Therefore, safety interventions should consider the impact of intense rainfall on pedestrian safety in the present and future possible climate.