Exploring the Influence of Customer Behaviour on Frontline Employee Engagement 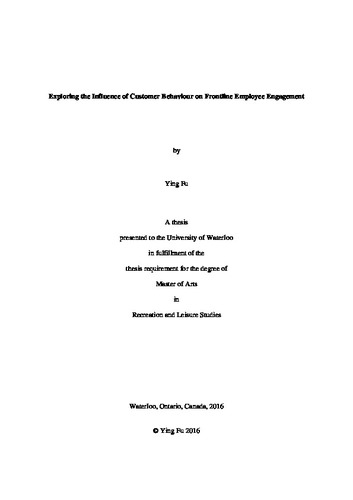 This study has extended our knowledge of critical customer behaviours experienced by frontline staff members and the potential impacts of such behaviours on their engagement at work. While employee engagement is positively associated with service quality (Harter, Schmidt, & Heyes, 2002), Gallup (2015a, 2015b) has found that only 32% of American workers, 13% of employees worldwide, and 6% of workers in China were engaged at work. This study attempted to recognize clues of frontline employee experience relevant to their engagement levels. The main purpose of the study was to investigate relationships between perceived customer behaviours (including customer participation, citizenship behaviour, complaint behaviour, and misbehaviour) and frontline employee engagement (FEE) in a sample of Chinese service workers. The secondary purpose of the study was to examine the roles that employee emotional assessment (EEA) of such service encounters play into these relationships. Also examined was whether workplace social support (WSS) mediated or moderated these relationships. Six hundred and three customer-facing frontline employees in nine restaurants, twelve hotels, and two provincial parks at Hainan Island of China completed the survey. Results suggested that EEA worked as a mediator and WSS played both mediator and moderator roles when customer behaviour had an effect on FEE. The positive effects of customer participation and citizenship behaviour on FEE were largely accounted for by WSS and partially explained by EEA of such behaviours. EEA of customer complaint behaviour, to a large extent, helped explain the negative effect of such behaviour on FEE. Customer misbehaviour had no significant effect on FEE. Further, higher levels of WSS from supervisors was linked to higher levels of FEE. Rewards and recognition from supervisors as well as sharing meals with them enhanced the positive effect of customer participation behaviour on FEE and buffered the negative impact of customer non-verbal complaint behaviour on FEE. Additionally, restaurant employees reported the highest levels of FEE among survey respondents. Findings highlighted the need for customer behaviour intervention to encourage their participation and manage their complaint behaviours during service encounters. Implications for practice are also discussed in the manager/supervisor development such as sensitivity training and workplace culture improvement to create the right environment for engagement.