The Effect of Technological Innovations on Economic Activity 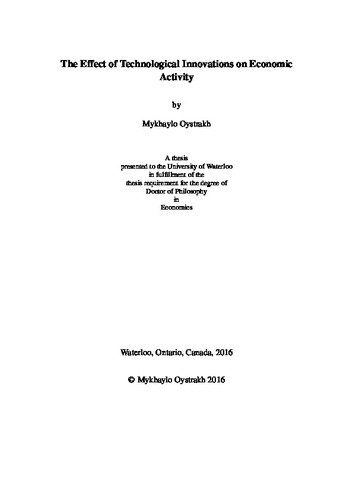 In this PHD dissertation, the nature of technological shocks and their effect on economic activity are examined. The first chapter is dedicated to the analysis of general purpose technologies (GPTs) and their identification in the patent data. I argue that the previous literature has been identifying sub-technologies of a given GPT rather than the technology itself. Moreover, I argue that the quantity of active GPTs identified using the old methodology is substantially greater than theoretically possible. The first chapter of my thesis presents an alternative approach to the identification of a general purpose technology than the one used in the previous literature and provides an example of such a technology identified in the patent data. This technology is the microcomputer. The chapter examines its evolution, diffusion, and the effect it has on other patented technologies. The findings are in line with the theoretical GPT literature. In the second chapter of my dissertation, I examine the effect of a positive technology shock on aggregate hours worked. Compared to the previous literature, the novelty of the approach proposed in the current study comes from two directions: the choice of variables and the technique used to identify the technological shock. A patent-based measure is the main measure used to approximate the unobserved aggregate technological process. The second important novelty of the study is the use of the sign restriction Vector Autoregression (VAR) shock identification technique that is believed to be more robust than the alternative identification techniques used in the literature. The sign restrictions are determined using a general equilibrium model with skilled and unskilled labour featuring skill-specific and general technology shocks. The analysis shows that aggregate hours increase following both kinds of technological shocks. The results obtained in the study are robust to the technology measure used. When a patent-based measure is replaced with a production function residual measure the effect of the shock still improves the aggregate hours. Moreover, the results are robust to the way aggregate hours themselves are specified. Finally the results are supported when more conventional long run restrictions are applied on the VAR. However, with the long run restrictions it does matter how the aggregate hours are specified the same way it mattered in the previous studies. In the third chapter, I continue the analysis of the effect of a technological improvement on the labour market. In this study, I attempt to address the general criticism of the VAR methodology about the fact that only a limited number of variables can be processed. This limitation requires a researcher to make a choice in favour of certain variables and to justify this choice. Moreover, no matter which variables are chosen for the final modeling form, some information would still be excluded from the study. I overcome this limitation by incorporating factor analysis techniques into the VAR framework. I introduce Factor-tofactor VAR (F-FAVAR) that is an extension of the FAVAR approach that has already been succesfully used in the past.The F-FAVAR methodology allows an inclusion of a latent factor "impulse variable" besides the latent factor "response variables". As a result a large number of macroeconomic variables is examined and there is no necessity to exclude any of the variables. Moreover, there is no necessity to make a choice in favour of a particular measure of technology. All the relevant technological measures can be included into the model. As a result it is possible to examine the reaction of various economic and business variables to a technological shock. The reaction of the key economic variables to a technology shock is in accordance with the theory. The reaction of various labour measures to the shock was also examined. The results of the third chapter mainly support the findings of the second chapter about the positive effect of a technology shock on aggregate hours. In order to check the robustness of the results, instead of the F-FAVAR methodology, a simple FAVAR methodology was also used. For that methodology it was necessary to select a particular measure of technology to be included into the VAR model as well as to impose restrictions on the VAR. Several different technology measures with two alternative sets of restrictions were used. The results of the robustness analysis mainly support the findings of the F-Favar methodology.