"My Name Is Lizzie Bennet": Successfully Adapting Jane Austen's 'Pride and Prejudice' (1813) for the Twenty-First Century with 'The Lizzie Bennet Diaries' (2012-2013) 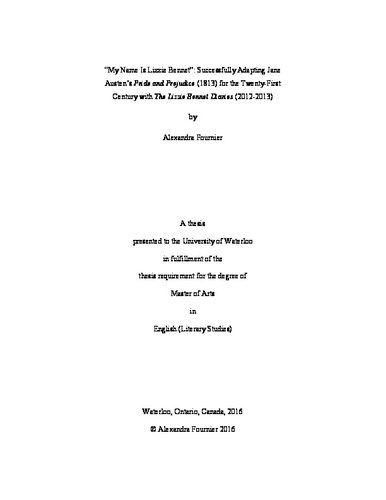 This thesis argues that The Lizzie Bennet Diaries (or the LBD), the 2012 transmedia YouTube webseries adaptation of Pride and Prejudice, is a successful adaptation of Jane Austen’s novel because – like its source text – it is all about communication. Told primarily in a video-diary format, the LBD is a transmedia narrative that spans across various traditional, digital, and social media platforms. All of the characters within the narrative interact with one another via video blogs, texts, tweets, and even handwritten letters while simultaneously inviting viewers to participate and immerse themselves in the story by responding to the characters’ online activity. The form, content, and audience engagement of this particular adaptation thus hinges on various forms of communication to tell Austen’s story of marriage, manners, and misunderstandings. The LBD therefore not only succeeds as an adaptation, but specifically as one of the definitive adaptations of Pride and Prejudice due to its ability to respectfully yet innovatively translate its source text into the twenty-first century in a way that keeps Austen’s emphasis on communication central to how, why, and with whom the story is retold. Thus, as a successful adaptation, The Lizzie Bennet Diaries is a successful act of communication, which gives a fresh voice to Jane Austen’s two-hundred-year-old novel, hence reaffirming its significance to a new generation of audience and preventing it from lapsing into silence.