The Socio-ecohydrology of Rainwater Harvesting in India: Understanding Water Storage and Release Dynamics at Tank and Catchment Scales 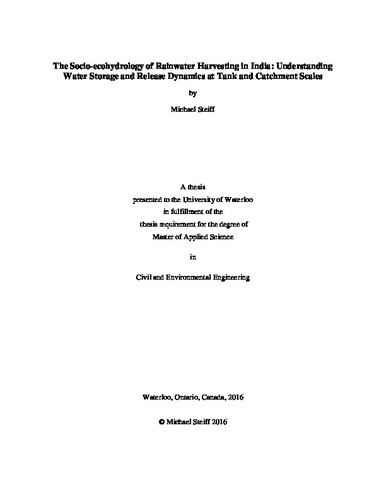 Rainwater harvesting (RWH), the small-scale collection and storage of runoff for irrigated agriculture, is recognized as a sustainable strategy for ensuring food security, especially in monsoonal landscapes in the developing world. In south India, these strategies have been used for millennia to mitigate problems of water scarcity. However, in the past 100 years many traditional RWH systems have fallen into disrepair due to increasing dependence on groundwater. This dependence has contributed to accelerated decline in groundwater resources, which has in turn led to increased efforts at the state and national levels to revive older RWH systems. Critical to the success of such efforts is an improved understanding of how these ancient systems function in contemporary landscapes with extensive groundwater pumping and shifted climatic regimes. Knowledge is especially lacking regarding the water-exchange dynamics of these RWH “tanks” at tank and catchment scales, and how these exchanges regulate tank performance and catchment water balances. Further, the effects of imposing management controls on improving tank system sustainability and the ability to meet crop water requirements are not well understood. In this thesis, I have attempted to quantify the water exchange dynamics in a cascade of four RWH tanks, using a conjunction of field data and modeling, in the Gundar Basin watershed in Southern Tamil Nadu. Water level sensors were installed in the tanks over the NE monsoon season. Using fine-scale water-level variations, the White method was used to estimate daily fluxes of groundwater exchange (GE), and evapotranspiration (ET) in the four tanks over the 2013 northeast monsoon season. Groundwater recharge and irrigation outflows comprised the largest fractions of the tank water budget, with ET accounting for only 13-22% of the outflows. While water from the tanks directly satisfied ~ 40% of the crop water requirement across the northeast monsoon season via surface water irrigation, a large fraction of the tank water was not available for direct use in the tank’s irrigated area. This is because the sluices were not managed properly, and discharged continuously, instead of only supplying water when it was required for irrigation. For the cascade, a distinct spatial pattern in groundwater-exchange dynamics was observed, with the frequency and magnitude of groundwater inflows increasing down the cascade of tanks. The significant magnitude of return flows along the tank cascade leads to the most downgradient tank in the cascade having an outflow-to capacity ratio greater than 2. The presence of tanks in the landscape dramatically altered the catchment water balance, with runoff decreasing by nearly 75%, and recharge increasing by more than 40%. The second major output is a tank water balance model to evaluate the effect of climate versus management controls on tank water dynamics. The model was run with a 65-year long (1906- 1969) rainfall dataset to evaluate climatic controls, while the two primary management controls imposed were those of an alternate planting date, and the management of sluice outflows to discharge only the amount of water needed for the crops in the irrigated area. Following the imposition of management controls, these previously unutilized outflows were converted more effectively into groundwater recharge (24-54%) and sluice outflow to meet crop water requirements (9-54%) than ET (5-21%). For the long-term (65 year) simulation, catchment scale reductions in runoff (60-80%) and increases in recharge (17-53%) were largely dependent on variations in seasonal rainfall, with proportionally larger decreases in catchment runoff for years of higher seasonal rainfall. Additionally, three sustainability metrics were defined, namely reliability (probability of successfully meeting crop water requirements), resilience (likelihood of meeting crop requirements after a year of crop failure), and vulnerability (severity of crop water requirement shortfall during failure years) to explore the effects of management controls on tank system performance. Evaluation of the sustainability metrics revealed sluice management driven increases in reliability and resilience for tanks 1 and 4. In tanks 2 and 3, increased reliability and resilience was found as a result of changes in the planting date. Vulnerability remained largely unchanged except for tank 2 which became less vulnerable following the imposition of management controls.