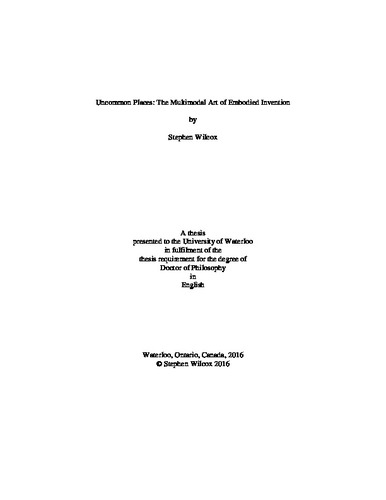 This dissertation develops the concept of embodied invention, an epistemology and design philosophy that treats multimodal media—such as comics and videogames—as heuristics for translating knowledges between bodies, communities, and cultures. In classical rhetoric invention refers to the art of discovering knowledge through the commonplaces—those opinions, beliefs, and values common to a particular time and place. Rhetors would train themselves in invention by studying commonplace books—texts that contained common expressions, phrases, and allegories of a particular community, region, or culture. Drawing on phenomenology, semiotics, and media theory, this dissertation puts forward an embodied account of invention, one that correlates knowledge of the world with one’s position or place in the world. The commonplaces, then, are as much bodily and sensory as they are social and cultural, and as such the notion of commonplace books needs to be expanded to include media that capture not just the common expressions and phrases of a particular time and place but the common sensations and sensory experiences of particular bodies and cultures. This novel understanding of invention sheds light on conceptions of embodiment, normalcy, and knowledge translation. Feminist and disability studies scholarship exemplifies how some places are—culturally, socially, and phenomenologically—more common than others, and that commonality (or lack thereof) facilitates or inhibits the movement of knowledge. Multimodal media afford people marginalized by what is held to be common or normal—such as women, LGBTQ persons, persons of colour, and persons with disabilities—with the means to convey the sensory and semiotic situation in which their knowledges are situated. Graphic autobiographies and memoirs—such as Cece Bell’s El Deafo and Paul Karasik and Judy Karasik’s The Ride Together: A Brother and Sister's Memoir of Autism in the Family—and (semi-)autobiographical videogames—such as Mainichi and The Oldest Game—can be seen to represent both the sensory and socio-cultural commonplaces of their authors, fostering a form of invention that is capable of translating knowledges embedded within sensory, social, and cultural situations. In order to make this point effectively, and to demonstrate its applicability to design, a portion of this dissertation is argued through an accompanying videogame called Allergies & Allegories.