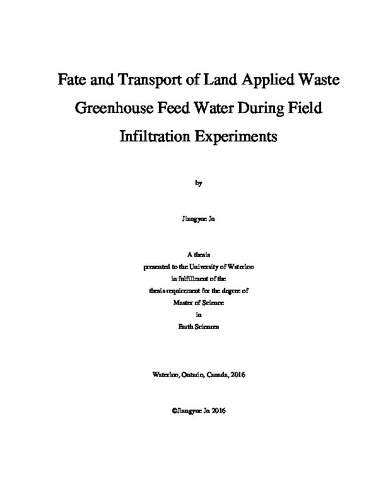 Because of the high concentration of greenhouses in Essex County, greenhouse feed water discharges are considered as a potential contributor to nuisance and harmful algal blooms and hypoxia in western Lake Erie. Waste greenhouse nutrient feed waters (GNF) are comparable to other nutrient sources used in agriculture. Land application of greenhouse nutrient feed water to adjacent crop land is regarded as a potentially suitable alternative to in-house wastewater treatment systems both in cost and ease of adoption. Therefore, the land application of the feed water can be an appropriate management response to the nutrient load issues in such water courses. Compared to other non-agricultural source materials, such as biosolids, GNF are under studied and much less used as sources of alternative fertilizers. In an effort to assess the potential environmental impacts of this land application option, a collaborative monitoring program was established at partner greenhouse operations near Leamington, ON. We hypothesized that the nutrients and other dissolved constituents of concern in feed water applied to active crop lands would be absorbed and attenuated to an acceptable level within the soil profile before reaching the local ground water table. Investigations of this hypothesis involved the controlled land application of GNF on active cropland managed by greenhouse operators in the vicinity of Leamington, ON. Four field trial sites were established and characterized for controlled plot size experiments. Field installations included porous cup lysimeters for the collection of soil water samples and groundwater monitoring wells above and below water table to monitor long term groundwater quality and water table fluctuations; composite soil samples taken at randomized locations within the field plots. Local precipitation was also measured using on-site rain gauge station. At two of the field sites, feed water from the greenhouses was applied to the monitored plots in the fall as a pilot infiltration experiment. In the second year, feed water was applied together with a conservative tracer at all four field sites in the spring. Composite soil samples and water samples including soil water from lysimeters, shallow groundwater from monitor wells and surface water from tile outlets were collected both before and after the land application events. Geochemical analysis was focused on target species including nutrients, heavy metals and applied conservative tracer. By comparing the field data sets, high variability in fate and transport of land applied GNF was observed under different soil conditions. Surficial soil permeability and the potential presence of macropore features are highly related to the land application performance. However, the results demonstrated that the majority of the GNF applied at highest permissible rates over a variety of different soil types and agricultural land use practices, typical of the Leamington Area, remained within the vadose zone and at low concentrations over the course of the monitoring period. Based on the results obtained from all of the controlled GNF land application experiments, it was observed that nutrients and other dissolved constituents of concern in the applied are significantly attenuated in vadose zone and remain at very low concentrations. No evidence of significant environmental impact from the land application of GNF was observed. Overall, the results of the study suggest that the land application GNF under Ontario’s regulations could be considered as a feasible and environmentally reasonable alternative to other waste water treatment option for managing GNF. Additional insight could be derived from monitored field-scale land applications of GNF on various geographical settings and agricultural land use practices within the Leamington area.