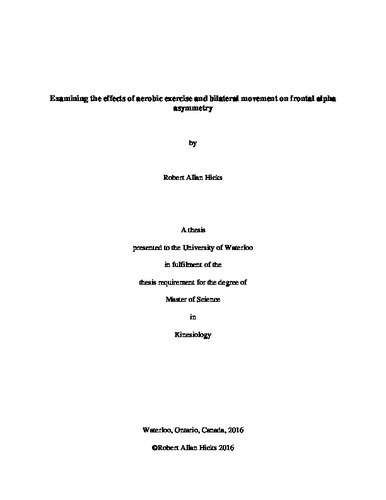 Determining the effects of different interventions on brain activity related to depression is imperative to prevention and treatment of the disorder. One measure of brain activity related to depression, called “frontal alpha asymmetry” (FAA), measures differences in resting brain activity between the left and right prefrontal cortices. Using electroencephalography, measuring differences in resting alpha activity between these two regions is theorized to help quantify an individual's predisposition to depression. This thesis, comprised of two studies, aimed to investigate the influence of aerobic exercise and bilateral rhythmic movement on FAA in young healthy adults. Study 1 investigated the test-retest reliability of FAA within a two-day period in order to first understand the short-term stability of FAA. Results showed that FAA has low to moderate test-retest reliability in this time period, while its contributing alpha powers had moderate to high test-retest reliability. It was concluded that FAA is stable to use in a repeated measures design, however, should be accompanied by its contributing alpha powers to inform any observed changes. Study 2 aimed to investigate the effects moderate aerobic exercise and bilateral rhythmic movement on FAA. Results showed that aerobic exercise caused a significant increase in FAA scores 22-38 minutes post intervention. Furthermore, bilateral rhythmic movement did not lead to a significant change in FAA at any time point post intervention. Results from this study suggest that there must be some physical demand to positively influence FAA. Further research should investigate these effects in a clinically depressed population to help understand how aerobic exercise may help in treatment of depression.