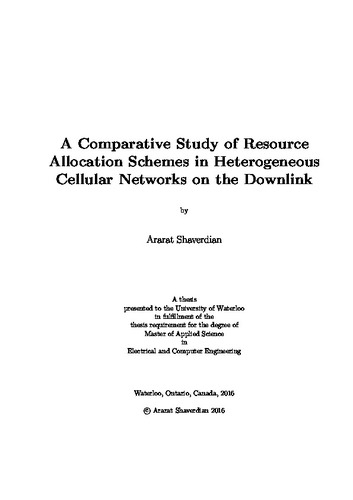 Network densification through heterogeneous networks (HetNets) is considered as a promising paradigm to address the ever increasing mobile users’ data demands in 5G networks. A HetNet consists of macro cells (each with a macro base station) overlaid with a number of small cells (each with a low-power base station) and has been shown to significantly improve the network capacity when supported by carefully designed radio resource management (RRM) techniques. RRM is typically studied via a joint optimisation problem over three network processes, namely, resource allocation (RA), user association (UA) and user scheduling (US), and is the focus of this thesis. Our first objective is to characterise the optimal HetNet performance by jointly optimising these three processes through a unified framework under different channel deployment scenarios. Towards this, we focus on two RA schemes, namely, partially shared deployment (PSD) and co-channel deployment with almost blank subframes (ABS), proposed by 3GPP for future HetNets. In the first part of the thesis, we revisit a unified optimisation framework under PSD that allows us to configure the network parameters (e.g., number of channels per-cell and power per-channel) and allocate optimal throughputs to users in a fair manner. The framework under consideration is based on a snapshot model where, in each snapshot, the number of users and channel gains are assumed to be fixed and known. Although the previous study on this framework provides many interesting engineering insights, it is primarily based on two wrong assumptions in terms of channel modelling and US which we correct in our work. We also revisit a similar framework but under ABS and conduct a thorough comparative study between ABS and PSD. We first show that the U+03B1-fair scheduling problem under ABS is generally much more involved than that under PSD for U+03B1 U+2260 1. To verify whether the US complexities involved from deploying ABS are justifiable, we compare the throughput performance of the two schemes under a static setting, where the number of users in each snapshot is assumed to be fixed. Our results indicate that PSD outperforms ABS for different choices of U+03B1-fair and under different HetNet configurations. In the second part of the thesis, we further study our frameworks under a dynamic setting and continue our comparisons between the two RA schemes under different service-time models. The dynamic setting, as well as reaffirming the upper-hand of PSD, provides a number of new insights, most importantly the fact that the conventional physical-layer based UA schemes do not always work well. Motivated by this observation, we further explore the problem of UA under PSD with the objective of improving an existing online UA scheme. We show that when users are periodically triggered to re-associate (on an individual basis), the online UA scheme can significantly improve the system performance.