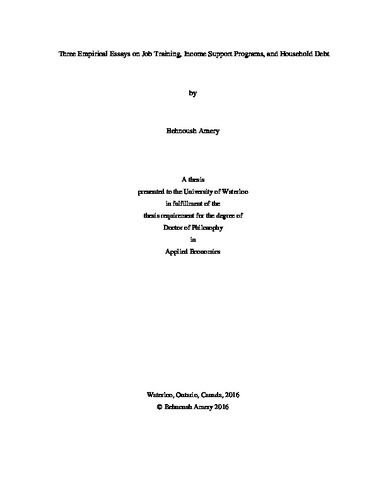 This thesis consists of three essays examining the effects of education and job-related training on promotions and wages in Germany, the effects of a reduction in Unemployment Insurance duration on the likelihood of joining welfare in Germany, and examining the debt-asset and debt-income ratios across different income levels in Canada. The first chapter uses the German Socio Economic Panel (GSOEP) to investigate the relative impacts of education and job-related training on job promotions within different occupation levels. The panel data allow me to control for the confounding effects of unobserved, time invariant, individual specific characteristics, and unobserved temporal shocks. My findings suggest that the recent job-related training increases the probability of promotion to middle level occupations, but has no significant effect on promotion to high and executive level jobs and on the corresponding wage increase. This effect appears greater for women than men. Although men have, on average, a higher probability of promotion and corresponding wage increase, job-related training increases the likelihood of promotion for women more than men. Moreover, the job-related training raises the probability of promotion to middle level jobs for higher educated employees more than for lower educated ones. That is, job-related training complements the role of higher education in increasing the probability of promotion to middle level occupations. The second chapter uses the German Socio Economic Panel (GSOEP) to investigate how a reduction in the length of Unemployment Insurance (UI) benefits may affect the likelihood of joining a welfare program for the individuals who have used UI benefits in Germany. If the UI program is not helping to return the unemployed to employment, the UI users may transition to a welfare program such as Social Assistance (SA) which provides financial support to low income households. Any modifications in the UI system might affect this transition. The results show that a less generous UI system, in terms of a reduction in UI duration, as a result of the Hartz reforms in Germany, increases the hazard of joining welfare. Lastly, the third chapter uses the Survey of Financial Security (SFS) to calculate the ratios of average total debts to total income and assets across different income levels over three years of 1999, 2005, and 2012. The debt-income ratio increases for all income levels over theses three years. The average debt-income ratio for low-income households earning less than $40K is 4.3 in 1999 and 6 in 2012 suggesting that these households owe, on average, 4.3 dollars in 1999 and 6 dollars in 2012 for every dollar they earn. The debt-asset ratios have also increased for all income levels in 2005 compared to the ones in 1999, but this ratio has increased in 2012 only for income levels greater than $80K. The findings suggest that power of households to pay back their debts, specifically for low income households, decreases from 1999 to 2012. The main sources of the increasing indebtedness of Canadians over these years are found as the debts on mortgages on principal and non-principal residences.