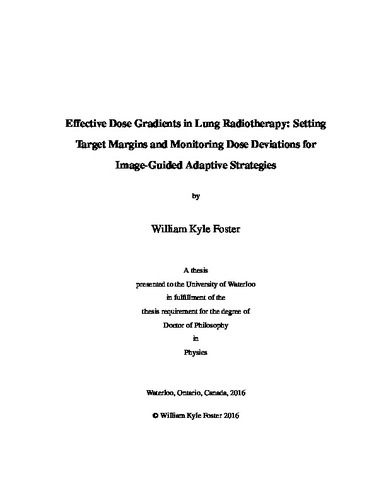 Organ motion is a major source of geometric uncertainty in the delivery of external beam radiation therapy. Organ motion that occurs during the delivery of radiation therapy is referred to as intrafraction organ motion. Intrafraction motion is most predominant in the lungs due to the respiratory motion of the diaphragm and lungs. This intrafraction motion presents a substantial challenge to physicists and clinicians interested in the accurate prescription and delivery of a dose in radiation treatment. The convolution model of target motion described in this work was used to assess the impact of respiratory motion on the delivered dose distribution. This model predicts the dose distribution that will be delivered in the presence of motion by performing a mathematical convolution between the planned dose distribution and a probability distribution describing the target motion. The model was modified from its original form to include the gradient of the probability density function, which provides additional insight into the effect of target motion. The validity of the convolution model in the context of intrafraction motion was established based on an analysis of the model assumptions as well as experimental validation of the model predictions using radiochromic film measurements. It is shown that the model makes useful predictions for a wide range of regular and irregular breathing patterns. Breathing trace recordings acquired during four dimensional computed tomography scans of $502$ unique patients were used in conjunction with the convolution model to simulate the effect of target motion using MATLAB code developed in house. The motion effect on dose coverage was simulated for each breathing trace on a range of target sizes in order to establish trends which can be used to guide margin selection. The required margins were found to have a clear dependence on the standard deviation of the probability distribution describing the target motion. A method for calculating the margin required to maintain target dose coverage is presented. A table of margin recommendations for a range of breathing patterns and target sizes is presented. The effect of motion was also simulated on clinical treatment plans including a 3-field, a 4-field and a volumetric modulated arc treatment. The clinical treatment plans demonstrate the interplay between the static dose gradients seen in a clinical setting and the loss of dose coverage due to breathing motion. The validity of the technique is demonstrated for an extreme case of a small lung target undergoing large amplitude motion. This result represents the full use of the proposed methodology. The process demonstrates that using the margins recommended in this work will ensure target dose coverage, but that compromises will be made relative to the plan with unmodified margins. The target dose coverage comes at the expense of increased target volume and potentially increased dose to nearby organs at risk. An analytical approximation of lung target motion and static dose distributions using Gaussian functions is used to demonstrate the limit of the technique for small fields and the sensitivity of the model to its key parameters.