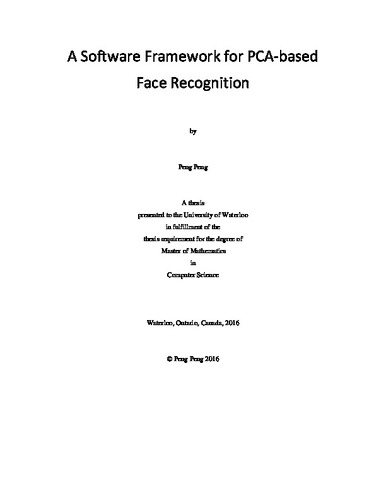 Face recognition, as one of the major biometrics identification methods, has been applied in different fields involving economics, military, e-commerce, and security. Its touchless identification process and non-compulsory rule to users are irreplacable by other approaches, such as iris recognition or fingerprint recognition. Among all face recognition techniques, principal component anaylsis (PCA) was proposed in the earliest stage; however, it is still attracting researchers in this field because of its property of reducing data dimensionality without losing important information. PCA-based face recognition has been studied for decades. There exist some image processing toolkits like OpenCV, which have implemented the PCA algorithm and associated methods. Nevertheless, establishing a PCA-based face recognition system is still time-consuming, since there are different problems that need to be considered in practical applications, such as illumination, facial expression, or shooting angle, which can hardly be solved by the toolkits. Furthermore, it still costs a lot of effort for software developers to integrate the implementations of the toolkits with their own applications. Therefore, the thesis provides a software framework for PCA-based face recognition aimed at assisting software developers to customize their applications efficiently. The framework describes the complete process of PCA-based face recognition, and in each step, multiple variations are offered for different requirements. Through various combination of these variations, at least 108 variations can be produced by the framework. Moreover, some of the variations in the same step can work collaboratively and some steps can be omitted in specific situations; thus, the total number of variations exceeds 150. The implementation of all approaches presented in the framework is provided.