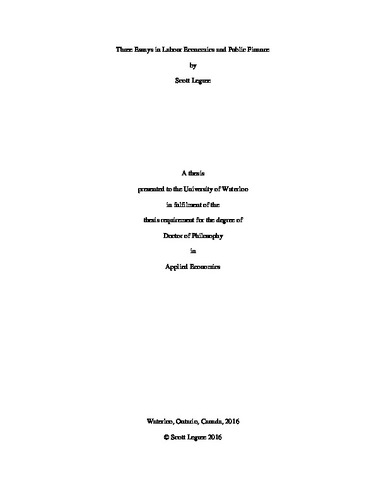 This three-chapter thesis evaluates the potential for two major government policy levers to influence income inequality in Canada: the tax and transfer system, and the labour relations framework. The first two chapters are concerned with estimating how tax-filers respond to changes in tax rates, and the extent to which governments are limited in raising income tax rates on higher income individuals to fund transfers to lower income individuals. The final chapter examines the possibility that governments can increase the bargaining power of labour unions through changes in labour legislation, and in turn, reduce wage inequality within the labour market. The elasticity of taxable income measures the degree of responsiveness of the tax base to changes in marginal tax rates. Recent Canadian estimates of this elasticity have found moderate elasticities for earners in the top decile, and high elasticities for earners in the top percentile (for example Milligan and Smart (2015) and Department of Finance (2010)). In Chapter 1, I explore the underlying mechanisms that generate the relatively higher estimates at the top of the income distribution. Using the Longitudinal Administrative Databank (LAD), I estimate elasticities for several sub-components of taxable income, such as earned employment income and total income. In contrast to other research, I find modest elasticities of taxable income, even within the top percentile. I demonstrate that elasticities estimated using the Gruber and Saez (2002) specification are sensitive to choices of weights. In Chapter 1, I find small elasticities not only for total and taxable income, but also for another very important income concept: employment income. Specifically, I find employment income elasticites of less than 0.07 for all income deciles. These elasticities, however, represent average estimates for heterogeneous workers who face different constraints and who have different incentives to respond to changes in tax rates. In Chapter 2, therefore, I estimate elasticities for different types of workers by dividing the sample by gender and by attachment to the labour force. Using the Survey of Labour and Income Dynamics (SLID), a survey with detailed information on labour hours and job characteristics, I find higher elasticities for female workers and for workers with a weaker attachment to the labour force. I test for robustness of the estimates by varying the income increment used to calculate the marginal effective tax rates (METRs), as well as varying the number of years between observations. A second-order benefit of Chapter 2 is it serves as a robustness check on the results of Chapter 1. That is, we reproduce the elasticity estimates for total income and taxable income from Chapter 1 with a different dataset, and find similar results. Chapter 3 turns to the potential role of labour relations reforms to influence Canadian income inequality. Labour relations policy in Canada, studied extensively for its impact on unions, has not been studied more generally for its role in income inequality. In this chapter, I provide evidence on the distributional effects of labour relations’ reforms by relating an index of the favorableness to unions of Canadian provincial labour relations laws to changes in industry-, occupation-, education-, and gender-specific provincial unionization rates between 1981 and 2012. The results suggest that shifting every province’s 2012 legal regime to the most union-favorable possible (a counterfactual environment) would raise the national union density by no more than 8 percentage points in the steady state. I also project the change in union density rates that would result in the counterfactual situation for several demographic subgroups of the labour force. While there is some evidence of larger gains among blue-collar workers, the differences across these groups are small and in some cases suggest even larger gains among more highly educated workers. The results suggest reforms to labour relations laws would not significantly reduce labour market inequality in Canada.