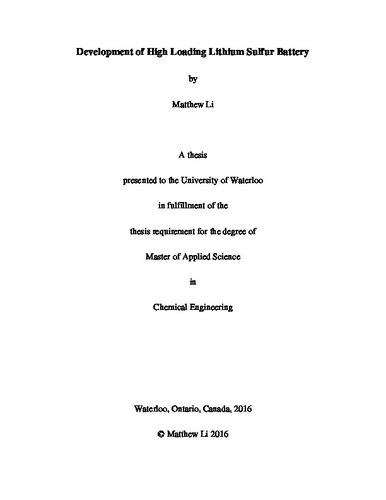 The topic of batteries has been given much attention. With the development and rapid improvement of transistors, the power requirement of our electronics are quickly becoming higher and higher. Unlike Moore’s law, since the commercialization of its newest iteration, the lithium ion battery (LIB) the battery technology has shown only incremental improvement. Popular fashionable companies such as Tesla has developed electric vehicles with acceptable mileage of around 400 km per change. Even with Elon Musk’s ambitious goals, championing the change in the whole automotive industry, scientific barriers are met as the theoretical limits of the battery materials are reached. To answer to this, researchers around the globe have revisited old and thought to be too difficult to implement technologies such as the lithium sulfur battery (LIS). A LIS possesses a sulfur cathode and a lithium anode, which leads to one key advantage to LIBs, sulfur can store/bond to lithium at much higher ratios than traditional cathodes in LIBs. Boasting a theoretical energy density of about 5 times that of the current LIB, this technology has the potential to ultimately surpass and replace a lot of the LIB out in the market. Unfortunately, the reason it was given up decades ago was due to its debilitating problems. First and foremost, sulfur is a very good insulator making it difficult to efficiently deliver electrons to its reaction sites. Furthermore, during discharge and charge sulfur will dissolve into the electrolyte, upon deposition on insulating spots in the cell it disconnects itself from the circuit. In short the LIS are not durable and suffers from terrible cycle life. To address these challenges, researchers have develop many clever engineering designs such as modification to the electrodes, electrolyte, separator, anode all of which have shown great promise on the lab scale resulting in LIS with impressive performance surpassing LIBs. The first part of this thesis will be to develop a type of nitrogen doped porous carbon material that will serve as a modifier for the cathode improving its performance over bare sulfur cathodes. A first discharge of 1060 mAh g-1 was achieved at 0.2C and stabilized to ~860 mAh g-1 , a ~81 % retention in capacity over 100cycles. This material also offered significant improvements in rate performance. It was able to discharge at 5C delivering ~600 mAh g-1. Both the cycle stability and rate performance illustrates the impact of using nitrogen doping for LIS. In order for LIS to reach the market the one key parameter has to be addressed first and that is the loading of sulfur in the battery. Many of publications have displayed near theoretical/ideal performances, seemingly revolutionizing the battery industry, but unfortunately at impractically low loadings. Continuing from the low loading high performance electrodes of the first part of this thesis, the work in the second part will improve upon the porous carbon material allowing its application in high loading electrodes. It was quickly discovered that the nano-sized nitrogen doped porous carbon was unable to yield a robust electrode at higher loadings. Cracks and pinholes formed throughout the electrode leading to the eventual flaking/delamination of material. Larger nitrogen-doped porous carbon was synthesized through a simple addition of NaCl into the synthesis procedure. This aggregated the smaller polymer particles together forming micron size particles. Larger nitrogen doped porous carbon easily formed thick electrodes while at the same time achieved exceptional electrochemical performance. With a discharge rate of 0.1C a specific capacity of 1300 mAh g-1 was reached stabilizing to 1050 mAh g-1 after 50 cycles. Moreover, at 0.2C and 0.5C discharge rates this material delivered ~1000 mAh g-1 and 900 mAh g-1 respectively on first discharge.