Ideologies of Medellín's Miracle: A critique of architecture's new utopia 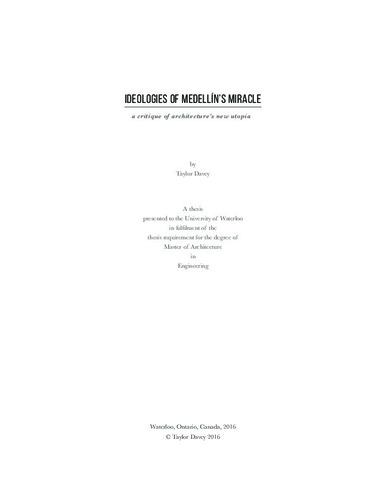 Once considered the most violent city in the world, the city of Medellín, Colombia has more recently received global notoriety as a model of architecture and urban planning for social development. This notoriety originates with the city’s Social Urbanism programme (2004–2011): a developmental model positioned on ideas of social inclusion through territorial, aesthetic, and symbolic strategies of transformation. During the administrative terms of Sergio Fajardo and Alonso Salazar (both members of the new Left party Compromiso Ciudadana) an impressive number of aesthetic buildings and public spaces were built in informal communities across the urban periphery, in a political climate praised for its inclusive strategies of development. “The most beautiful for the most humble,” was Fajardo’s famous adage. Since this period, Medellín has continued to receive significant notoriety. Medellín was named “Innovative City of the Year” by the Wall Street Journal and CitiBank in 2013, and was host to UN- Habitat’s World Urban Forum 7 (2014) entitled “Urban Equity in Development.” However, development in the city has recently departed from the Social Urbanism model, transitioning from small scale architecture and public space as points of community intervention, to the implementation of large-scale urban development projects that bear significant resemblance to more conventional, 21st century models of urban restructuring. At the same time, evidence of chronic violence and forced displacement are raising questions about what current development might hide about everyday realities in its production of a new “Global” city. Many critics concerned with this new direction identify a break in priorities and strategies between the administrative era of the Compromiso Ciudadana and the current administration; however, a more critical investigation into the actors and stakeholders involved in Medellín’s recovery process reveal the way by which today’s development might actually be a logical and intended outcome of the success of Social Urbanism. This analysis requires a broadening of the political and historical analysis, to investigate the dynamics of local power that extend through the 20th century. It also requires a critical investigation of Social Urbanism as a program that, while perhaps possessing some transformative and dignifying agency at the local scale, was treated as an iconic spatial “object” that produced a very specific meaning for the city both locally and globally through aesthetic strategies. Founded on Henri Lefebvre’s idea of social space as being actively produced, the thesis investigates to what degree Social Urbanism could be seen as a socially-transformative and political project based on the actors involved and the distribution (or centralization) of power in its recovery process. By framing the city’s urban development as the product of a much longer transformation – articulated by underlying social, political, and economic conditions of production – it seeks a more critical understanding of the way Social Urbanism’s urban spaces have actually affected everyday life in the city.