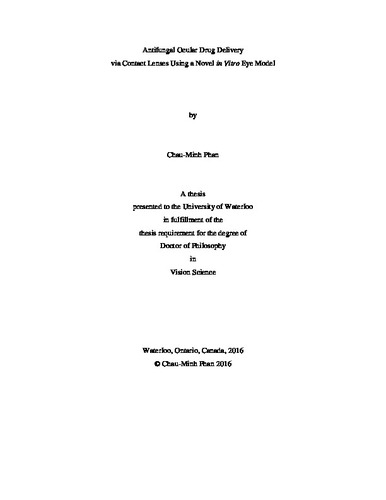 Purpose: The purpose of this thesis was to evaluate the potential of contact lenses (CLs) as an antifungal drug delivery device, and to develop an in vitro eye model to test thereof. Methods: The first three chapters focused on developing a CL to function as a drug delivery device for natamycin, the only commercially available antifungal: • In the first experiment (Chapter 3), the in vitro uptake and release characteristics of natamycin from several commercially available CLs were evaluated • In the second experiment (Chapter 4), to improve the release characteristics of natamycin from contact lenses, an attempt was made to incorporate novel drug-encapsulated nanoparticles (Dex-b-PLA) within the CLs • In the third experiment (Chapter 5), an alternative strategy employing the incorporation of cyclodextrin (CDs) within the CL polymer matrix was evaluated as a potential modification to prolong the release of natamycin The second half of the thesis was aimed at developing a sophisticated in vitro ocular model capable of adequately measuring drug release from CLs: • In Chapter 6, the design of a novel in vitro eye model to simulate the physiological ocular environment was outlined • In Chapter 7, this model was used to evaluate the release of the antifungal fluconazole from commercially daily disposable CLs • In chapter 8, as an extension of the developed in vitro eye model, an agar eye model was developed to test the effects of natamycin and fluconazole-releasing CLs on Candida albicans Results Commercial CLs, after drug incubation with natamycin, will release the drug rapidly within the first half hour, followed by a plateau phase. However, when CL materials were loaded instead with natamycin encapsulated within novel Dex-b-PLA nanoparticles, the release duration was extended to 12 hours. Modifying the CL polymer with methacrylated CDs did not significantly improve drug release. On the contrary, high loading of CDs decreased overall drug delivery efficiency, likely resulting from unfavourable arrangements of the CDs within the polymer network. The developed ocular platform, termed Ocuflow, simulates physiological tear flow, tear volume, air exposure and mechanical wear. When this system was used to analyze the release of fluconazole from commercial CLs, the drug release was sustained for up to 24 hours. This observation significantly contrasts drug release observed in a vial, which typically follows a burst-plateau profile. When CLs releasing natamycin and fluconazole were tested on agar eye models that were inoculated with Candida albicans, the growth of the yeast was limited by natamycin-containing CLs. The cell morphology of the yeast also differed noticeably based on drug-lens combinations.   Conclusions This thesis details potential strategies to develop novel CLs for antifungal ocular drug delivery. The Ocuflow system developed from this thesis is highly versatile; not only can it be used effectively to measure drug release from CLs, but it can also be applied to other in vitro analyses with CLs.