Molecular Biogeography of the Amphipod Genus Hyalella in North America 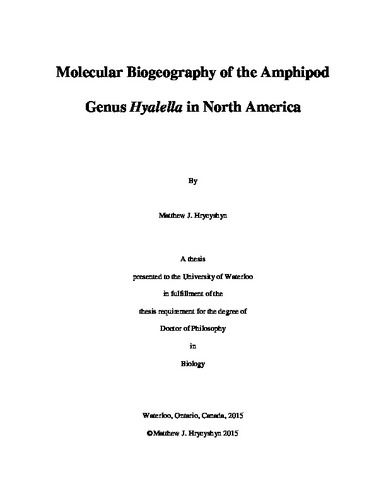 Hyalella azteca (order: amphipoda) was once thought to be one of the most broadly distributed North America freshwater crustaceans, but recent molecular studies have discovered several species belonging to a morphologically cryptic complex. This group consists of over eighty provisional species, most of which are endemic to isolated regions within the Great Basin. Previous research has focused on a limited number of Hyalella azteca populations within specific North American regions (the Great Lakes, the Great Basin, Oklahoma and Quebec). The geographic ranges of Hyalella species likely exceed the scope previously studied and their characterization requires a broader approach. This study explored the spatial distribution of nine Hyalella species from the analysis of five hundred and thirteen North American habitats. The sampling area focused on previously glaciated regions, but also included habitats south of the glacial limit. The Hyalella azteca complex can be separated into two distinct morphological groups on the basis of body size. Previous studies have demonstrated that the large-bodied Hyalella species can out-compete their small-bodied counterparts, except in the presence of centrarchids. Size-biased predation of the larger variant allows the small-bodied species to persist in habitats with predatory fish. The Pleistocene glaciations effect on modern-day distributions of the Hyalella azteca species complex is poorly understood. The repeated advancement and retreat of the glaciers in North America has influenced the demography of freshwater taxa. As species were displaced south of the glacial limit, they persisted in ice-free refuges and re-colonized glaciated regions after the last glacial maximum. Prior to this study, it was unknown to what degree that vicariance and post-glacial dispersal have had in shaping the distribution of the Hyalella species complex. In this study, the principal aim was to analyze biogeographical patterns within the Hyalella species complex from the spatial distribution of genetic variation. A combination of population genetics and phylogenetic approaches were applied to the cytochrome c oxidase 1, 16S, 28S and the first internal transcribed spacer genes; specifically, nested clade analysis, Tajima’s D, Fu’s F, Ramos-Onsins & Rozas R2, mismatch distributions, analysis of molecular variance, spatial analysis of molecular variance and isolation by distance curves. These methods were used to infer demographic patterns (isolation by distance, long distance dispersal, range expansions and fragmentation) and refugial origins of Hyalella lineages. This study has helped disentangle the demographic history and evolutionary relationships among a genetically divergent group of cryptic amphipods. Not only has Hyalella azteca been profoundly affected by the Pleistocene glaciations, but the distributions of its lineages are being influenced by both current and historical ecological pressures. The ranges of large and small-bodied morphotypes in unglaciated regions have likely been shaped by the presence of centrarchids. Small-bodied Hyalella were predominately restricted east of the continental divide and dispersed into the Great Lakes region from Atlantic or Mississippian refugia. Large-bodied Hyalella were distributed throughout North America and re-colonized glaciated regions from Mississippian, Missourian and Beringian refugia. The Great Lakes region was colonized by several species of Hyalella with habitats possessing sympatric lineages. The degree of spatial and genetic variation within the Hyalella azteca species complex demonstrates the need to characterize hidden diversity within North American fauna before it is lost to extinction or climate change.