NMR Studies of Protein and Peptide Structure and Dynamics 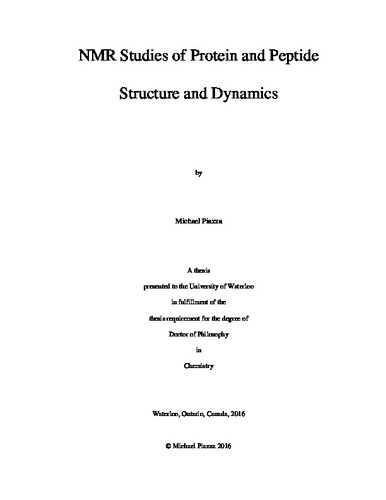 Calmodulin (CaM) is a small, acidic cytosolic calcium binding protein that responds to increases in intracellular Ca2+ concentrations. It is proposed to be involved in binding to and regulating over 300 functionally and structurally diverse proteins. It is comprised of an N- and C- terminal lobe separated by a highly flexible central linker region. Each of these lobes contains two EF hand motifs that are each capable of binding to one Ca2+-ion. CaM is found to exist primarily in two states: the Ca2+-replete form, holoCaM, or the Ca2+-deplete form, apoCaM. Both forms of CaM are able to bind to target proteins. CaM also undergoes post translational modifications that play a role in its regulation of target proteins. An important target of CaM are the nitric oxide synthase (NOS) enzymes. NOS catalyzes the conversion of L-arginine to L-citrulline and nitric oxide (·NO). Three isoforms of NOS are found in mammalian cells: endothelial (eNOS); neuronal (nNOS); and inducible (iNOS). All three isoforms of NOS are homodimeric and comprised of an N-terminal heme domain, containing the active site, and a C-terminal flavin-binding domain containing FAD-, FMN-, and NADPH- binding sites, linked together by a CaM-binding region. The nNOS and eNOS isoforms are constitutively expressed and are Ca2+-CaM-dependent. In contrast, iNOS is regulated at the transcriptional level and is Ca2+-independent. NOS is also found to be regulated through the phosphorylation and de-phosphorylation of key residues, specifically Thr 495, which is found in the CaM-binding domain. The exact mechanism of how CaM activates NOS is not fully understood. Studies have shown CaM to act like a switch that causes a conformational change in NOS to allow for the electron transfer between the reductase and oxygenase domains through a process that is thought to be highly dynamic. This thesis is focused on the structure and dynamics of CaM and CaM mutant constructs bound to the target peptides of the NOS CaM-binding domain at saturating and physiological concentrations of Ca2+. To investigate the structural and functional effects that the phosphorylation of Thr495 of eNOS may have on eNOS activation by CaM, the solution structure of CaM bound to the peptide comprising the eNOS CaM-binding domain phosphorylated at Thr495 was determined. To investigate the Ca2+-dependency of CaM binding NOS, nuclear magnetic resonance (NMR) studies were performed at various free Ca2+ concentrations to determine the structure and dynamics of NOS and CaM interactions at physiological Ca2+ concentrations. The results illustrate that structures of CaM-NOS complexes determined at saturating Ca2+ concentrations cannot provide a complete picture because the differences in intramolecular dynamics become visible only at physiological Ca2+ levels. Numerous studies use CaM mutants incapable of binding Ca2+ in either the N- or C-lobe to mimic apoCaM, with some of these studies reporting functional differences when comparing the mutant and apo forms of CaM. We investigated the structural consequences of these mutations by determining the residue-specific chemical shift perturbations induced by these mutations. This was accomplished by determining the full backbone chemical shift assignments of three Ca2+-deficient CaM mutants in the absence and presence of Ca2+, and investigating their interaction with the iNOS enzyme through determination of the solution structure of a Ca2+-deficient CaM mutant with iNOS. The use of NMR spectroscopy allowed for the determination of high resolution structures of these complexes. 15N relaxation and H/D exchange experiments also allowed for the analysis of the structural dynamics occurring in these complexes. NMR spectroscopy is an efficient method for studying the dynamics and structures of protein-protein and protein-peptide complexes.