Diagnosis and Management of Heart Failure: An Investigation to Evaluate a Device to Measure Jugular Venous Pressure 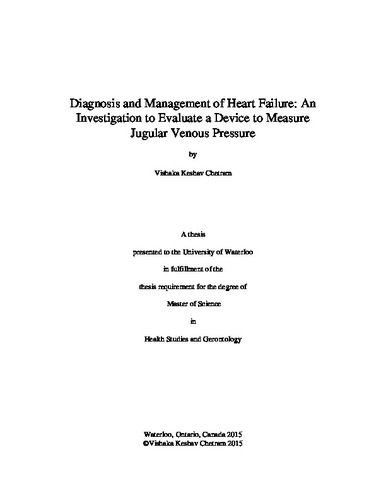 Diagnosing and managing heart failure (HF) can be challenging as patients sometimes present atypically with non-specific signs and symptoms. Effective management hinges upon an accurate, timely diagnosis. An important component of physical examination, the assessment of jugular venous pressure (JVP), can assist in the diagnosis and management of HF. Clinical assessment of JVP can be performed at the bedside using the Lewis method whereby the height of the jugular venous pulse above the right atrium is measured. Reliability of the maneuver can be affected by variability related to the appropriate vein to use, reference points, and variable classification of normal versus abnormal. A non-invasive point of care device, the Mespere Venous 1000 Central Venous Pressure (CVP) System, can be used to measure JVP. It has been approved by Health Canada and the Food and Drug Agency for commercial use. The overall aim of this study was to conduct a preliminary evaluation of the feasibility of using the Mespere Venous 1000 CVP System to measure JVP for the diagnosis and management of HF in primary care and long term care (LTC). The study involved two projects: Project I and Project II. Project I was conducted in one primary care and four LTC settings. It sought to gather qualitative information from the physicians and nurses about their perceptions relating to: measurement of JVP, acceptability of the device, perceived ease of use, and perceived barriers of the device. Focus groups and interviews were conducted with six physicians and nine nurses in primary care, and four physicians and ten nurses in LTC. Findings showed that the device was more acceptable and feasible to use for LTC clinicians than it was for primary care clinicians, particularly if its reliability among LTC residents could be demonstrated. Project I revealed that the low acceptability of the device in primary care appears to stem in part from a lack of understanding of the importance of the JVP and patterns of practice that favor transfers of patients to emergency department (ED) for more definitive management. Project II of the study aimed to assess the reliability of the device in the LTC setting. Two LTC physicians, two nurses and thirty six LTC residents participated in the study. The findings showed that the reliability of the device, when used by LTC nurses, was greater than that of physicians’ measures obtained with the Lewis method. In conclusion, the study suggests that the use of the point of care (POC) Mespere Venous CVP 1000 System to measure JVP is acceptable and feasible in the LTC setting, but less so in primary care. In LTC, it provides more reliable measures of the JVP than does clinical assessment by physicians. Additional study is required to further improve the reliability of the device when used by LTC nurses. Further work is also required to develop primary care processes that promote HF management within primary care settings, and whether the device could have a role in such settings.