Aperture Crossing in Challenging Environments: An Examination of the Factors that Influence the Passability of Narrow Spaces 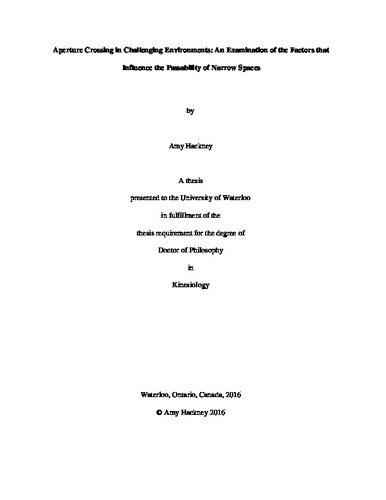 In order to get to where we need to go, locomotion often involves walking through narrow spaces. Whether an aperture affords passage is thought to be determined by the body size/aperture size relationship. For normal, ground-level aperture crossing, spaces 1.3x the shoulder width or smaller are considered impassible (requiring a shoulder rotation) and as such, 1.3x SW is said to be the critical point of aperture crossing. However, daily activities often involve navigating through apertures under more challenging circumstances, such as when walking through a busy airport while carrying luggage. As such, additional factors other than simply the body size and the aperture size may contribute to whether an aperture is deemed passable. Therefore, the purpose of this thesis was to investigate how the factors associated with challenging environments contribute to the way in which the body-environment relationship determines the affordance of aperture crossing. Through a series of experiments, participants walked through apertures: 1) while carrying a wide object, 2) under conditions of increased postural threat, 3) where the narrow spaces were created by other individuals, and 4) where there were multiple, misaligned apertures. In general, aperture crossing behaviour was monitored through the frequency and magnitude of shoulder rotations at time-of-crossing (TOC), the critical point, the amount of space between the shoulders and the obstacles at TOC (spatial margin), the position of the body relative to midline (M-L COM at TOC) and the walking speed leading up to and crossing through the aperture (approach velocity and velocity at TOC). The results from study one reveal that the passability of apertures adapts to objects being carried by rescaling the body-environment relationship to consider the new person-plus-object width and maintaining a critical point of 1.3x the widest dimension. However, this rescaling occurred at different rates across individuals. Studies two and three demonstrate that action capabilities (postural threat) and characteristics of the aperture (people instead of poles) alter the passability of apertures, as evident by more cautious crossing behaviours. Specifically, individuals maintained a larger critical point, a higher frequency and larger magnitude of rotation, as well as a slower approach velocity and velocity at TOC. Lastly in study four, rather than walk through the center of an aperture and equalize the size of the spatial margin of each shoulder (as observed in single aperture crossing), individuals walking through multiple misaligned apertures reduce the size of the spatial margin by walking closer to the object nearest midline. Furthermore, participants choose to rotate their shoulders at apertures that would not normally require a rotation, likely in an attempt to maintain the straightest possible walking path. Together, these studies suggest that additional factors other than the body size/aperture size ratio are considered when determining the affordance of aperture crossing. Specifically, in addition to supporting the idea that individual abilities are an important contributing factor to the identification of affordances, these results demonstrate that the affordance of aperture crossing is influenced by: 1) the level of postural threat, 2) characteristics of the aperture, and 3) the number and position of apertures. Understanding the typical behaviour for walking through narrow spaces and knowing what and how specific factors influence the passability of apertures provides the necessary groundwork for understanding how these behaviours are altered with age or disease and can provide insightful suggestions for the future design of cluttered environments.

Amy Hackney (2016). Aperture Crossing in Challenging Environments: An Examination of the Factors that Influence the Passability of Narrow Spaces. UWSpace. http://hdl.handle.net/10012/10369