The Metamorphosis of Self: Phenomenological Insights into the Meaning of Being for Immigrant Artists 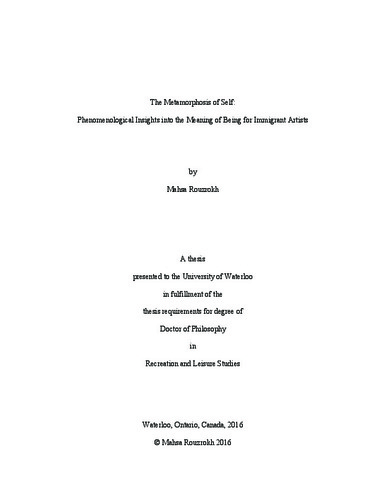 In 2013, 232 million people or 3.2 percent of the world's population lived outside their country of origin (United Nation’s Population Fund [UNPF], 2015). According to the UNPF, the majority of migrants venture into new lands to chase their dreams or to escape oppression, war, poverty, or misfortune. Regardless of their reasons for leaving their countries of origin, immigrants face profound shifts and transformations in their being. Diverse aspects of a humanly being are developed through interactions of mind and body with the physical environment, relationships with others, and practicing and cherishing cultural values and beliefs of a particular place. These constructed parts of our being then provide the pathways for perceiving, believing, evaluating, communicating, and acting in this world. Physical surroundings or space, and others or encounters, are dramatically influenced by migration. These domains affect the way immigrants make sense of their self and ultimately their being in a new home. This study utilizes Merleau-Ponty’s phenomenological explanations of being in relation to self, others, and space in order to create insights into the experience of migration for seven immigrant artists settling in Greater Toronto Area. The analysis reveals that after migration, participants experienced shifts in the ways they make sense of their being. The transformed being was expressed through a sense of living with two selves, the sorrow of separation from family and relatives, encounters with other individuals who have migrated, new relationships, and navigating through the unfamiliar physical surrounding. This study also exposes the role art plays in making sense of being in a new setting for these immigrants. Art making not only helped the participants accept the changes, but it also enabled them to explore their metamorphosed self and being in and through new art styles.

Mahsa Rouzrokh (2016). The Metamorphosis of Self: Phenomenological Insights into the Meaning of Being for Immigrant Artists. UWSpace. http://hdl.handle.net/10012/10366