The Tenth Big Move: Towards the Optimal Modal Split 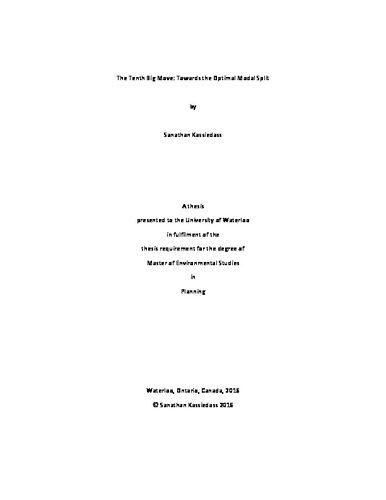 The Greater Toronto and Hamilton Area (GTHA) is currently experiencing a crippling traffic congestion problem. With an average daily commute time of 82 minutes, residents experience some of the longest commute times in North America (Metrolinx, 2008c, 2013a). The region is also facing explosive growth in its population and economy. It is expected to grow from roughly 6.5 million people today to 9 million by 2031. Several forces have contributed to the current congestion problem including: population growth, a lack of spending on transit infrastructure and operations, low-density development and a lack of co-ordination between land-use and transportation planning. This study asks: as population growth in the GTHA continues, how might we encourage a positive shift in modal split to mitigate traffic congestion? The problem is a wicked problem, and is essentially the symptom of several other problems. To address the complexity, a qualitative mixed-methods approach has been applied. Key informant interviews were held with planners, politicians, business leaders, and transportation advocates to understand local impacts, solutions and barriers. Next, a Policy Delphi was utilized to seek input from a panel of international experts on best practices. Finally, a local Design Charrette was held to seek creative ideas from a group of professionals and other participants. This study finds strong local support for the priority actions referred to as the Nine Big Moves of the regional transportation plan. However it also identifies a gap, in that the plan is missing a transportation demand management (TDM) policy with a fiscal element to manage demand. Without this, the supply-side techniques proposed by the Big Move will have limited success in mitigating congestion in a growing region. RECOMMENDATIONS: This study recommends the pursuit of a road pricing policy to be included in transportation plans – a policy which would replace the gas tax and charge road users a varying rate (peak/off-peak) for every kilometer that they drive. It would act as a dis-incentive to auto use, encouraging a shift in trips to alternate modes, routes, or times of the day. As a bonus, it could also generate funds to be re-invested in the transportation network. This would be the tenth Big Move which pulls together the other nine priority actions already in play. It is recommended that such a program could be implemented through a trial, first initiated with a pilot.