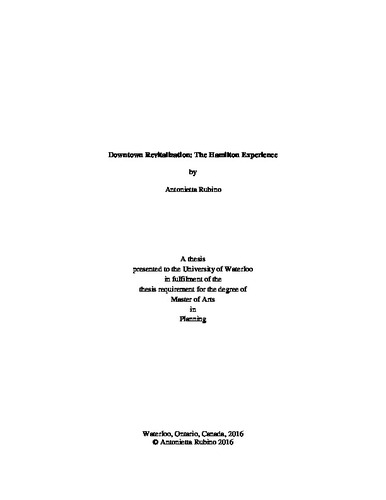 Abstract The role and function of downtowns have changed over time. Traditionally, downtowns were the social and economic hubs of a city. Downtown decline has been attributed to many interrelated factors including the construction of suburban areas, increased automobile use, and suburban shopping malls. Since the 1950s, several strategies have been used in North American cities in order to try and reverse downtown decline. Hamilton, Ontario, like many other North American mid-size cities, has attempted several revitalization projects in an attempt to renew the core. The purpose of this research is to gain a better understanding of factors that have historically prevented the successful revitalization of a downtown area within a mid-size city. This is explored through a case study of Hamilton, Ontario from the time period of 1955 to 2005. To address this question, a qualitative approach was used. This involved a literature review, the use of archival data, and key expert interviews on revitalization in downtown Hamilton. Firstly, this study identifies and reviews the history and trends of urban renewal in downtown Hamilton. Secondly, this study reviews whether there has been a gap between planning proposals and their implementation and if a gap exists, if it can be bridged. During the second half of the 20th century the character of downtown Hamilton was influenced by a series of plans and proposals aimed at core area renewal. The findings of this study indicate that large scale projects to demolish and rebuild tracts of the downtown, compete with suburban areas, or accommodate the automobile rather than pedestrians were not successful in the long-term at revitalizing the core area. Efforts that aided in downtown renewal included: public-private partnerships, private development, brownfield development, and creating a framework for future plans and renewal efforts through the Downtown Secondary Plan. Previous efforts failed because they relied too heavily on government funding, they were too large scale, they did not involve true public participation, and there was no solid framework backing the planning process. This research also indicates that there is a gap between planning proposals and their implementation and that there is room for this gap to be narrowed. The conclusion that this gap cannot be bridged is clear, however, working towards narrowing this gap is important. Narrowing this gap would involve a less reactionary approach to planning and continuing with small scale incremental changes that build confidence in the downtown area and encourage a sense of place. These initiatives should be part of a larger vision and should continue to include public participation.