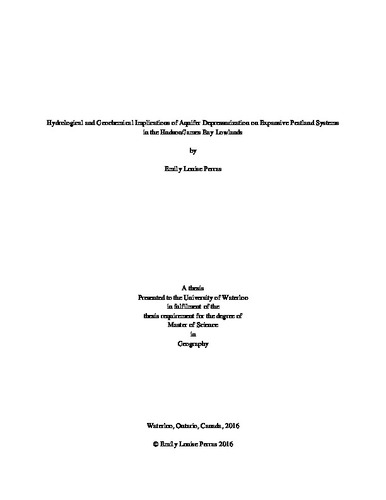 The ecological integrity of the peatlands of the Hudson/James Bay Lowlands (HJBL) is vulnerable to hydrological changes associated with climate change and resource development. Dewatering of an open-pit mine (the DeBeers Victor Diamond Mine), located within the interior HJBL, has already shown to increase downward hydraulic gradients and lower seasonal water tables within a peatland dominated watershed located proximal to the mine. Previous studies have yet to fully characterize the implications of increased downward hydraulic gradients and lowered seasonal water tables on surface runoff processes and on the biogeochemistry of the system. In this thesis, peat and stream water samples were analysed for environmental tracers (stable isotopes of water and chloride) and dissolved organic carbon (DOC), and they were used to identify possible alterations in peatland recharge, discharge and the production and transportation of dissolved organic carbon (DOC) to downstream ecosystems. Time series analyses (2008 to 2011) revealed systematic changes in the isotopic composition of hydrogen and oxygen in peat-water within the impacted region of the watershed regardless of non-impacted headwater contributions and variable weather conditions. The changes indicated that increased vertical hydraulic gradients had the greatest control on runoff generation as large storage capacities developed over the winter and summer (through increased deep seepage losses) resulted in a greater infiltration of precipitation and a subsequent reduction in surface flow contributions to stream discharge. Time series analyses of chloride also indicated a reduction in upward flow paths (dispersive and diffusive) and a reduction in the flow of mineral rich waters from the underlying mineral substratum thereby resulting in a change in the biogeochemistry of fen systems. During the summer, DOC analysis indicated that the hydrological alterations associated with aquifer dewatering are also increasing the internal production of DOC within the peatlands through an increase in the aerobic layer (lowered seasonal water tables) and an increase in labile carbon turnover (increased infiltration of event water). And, although greater evaporative isotopic signatures in stream water indicated less surface water contributions to stream channels, incoming precipitation during the fall wet-up period of 2012 was sufficient to reconnect the peatlands thereby providing an avenue for the newly decomposed organic matter to be dissolved and transported into downstream ecosystems. As such, although previous hydrologically based research had noted the role of annual rewetting of the peatlands in minimizing the effects of aquifer depressurization and masking alterations in runoff generation, hydrogeochemical analyses have revealed that such contributions are not isolating the peatlands and downstream ecosystems from the biogeochemical ramifications of an altered hydrological regime. Rather, hydrogeochemical analyses have identified alterations in the magnitude of peatland recharge, a subsequent shift in surface and subsurface contributions to receiving surface waters, a decline in the supply of mineral rich waters to the fens, an increase in peatland decay and subsequent increased surges of DOC to stream networks during the initial stages of aquifer depressurization (first 5 years). Our results demonstrate the usefulness of hydrogeochemical analyses in understanding the hydrological and biogeochemical implications of aquifer depressurization on expansive peatland systems within the HJBL.