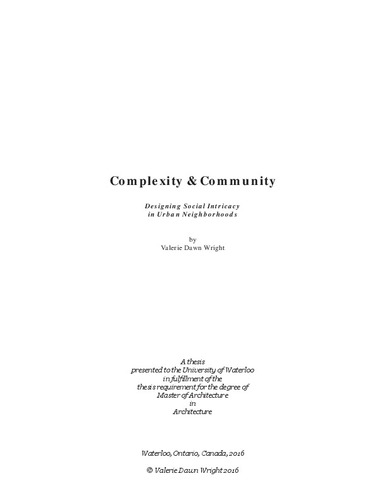 Over the last few decades, urban growth in Canada has shifted from continuous expansion of the urban periphery to the more complex layering of the urban centre. This change gives rise to a need to reassess our understanding of models of urban growth and to recalibrate them to suit the inherent value of urban neighborhoods. The most significant chasm between “growing out” and “growing in” is the ability to manage the complexity and intricacy that exists both spatially and socially in urban neighborhoods. An inward-focused growth requires a sensitive understanding of place, typology, and socio-cultural ecology that contemporary development models not only fail to address, but are often willfully ignorant of, and therefore liable to destroy. In thriving cities, the complexity and heterogeneity of the urban environment are unique and irreplaceable assets. These qualities are arguably one of the most essential aspects of the contemporary sustainable city, generating a rich urban fabric by maximizing points of contact, exchange and interface.[1] And yet, in contemporary mid-sized cities we tend to approach urban complexity with hesitation and suspicion because of its seemingly inherent messiness and refusal to become orderly. This thesis is premised on theories put forward by Canadian Architect George Baird, who has written that we need to pay the same attention to the preservation and reuse of existing urban fabric as we do to the efficient use of energy.[2] This necessitates a more nuanced approach to complexity, which in turn promotes a reconciliation of good design and social commitment. Originally posited as an idea about returning to a historicist city, this thesis advocates for their reconsideration as a return to complexity, rather than tradition. Set in Mary Allen Neighborhood in Waterloo, Ontario, this thesis leverages the richness of complexity within an urban environment to explore a model of growth based on inclusion rather than the superficial unity of exclusion.[3] The proposed design embraces the specific over the abstract, acknowledging and valuing the vital role played by social engagement and architectural intimacy in city making. [1] Salat, Serge, Loeiz Bourdic, and Caroline Nowacki. “Assessing Urban Complexity.” International Journal of Sustainable Building Technology and Urban Development 1, no. 2 (2010): 160-67. [2] Baird, George, and Barton Myers. Vacant Lottery. Minneapolis: Walker Art Center, 1978. (13) [3] Venturi, Robert. Complexity and Contradiction in Architecture. New York: Museum of Modern Art, 1966. (16)