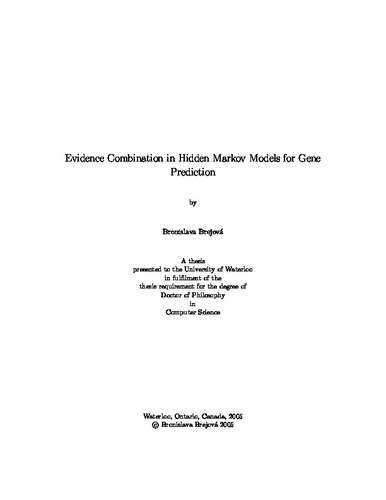 This thesis introduces new techniques for finding genes in genomic sequences. Genes are regions of a genome encoding proteins of an organism. Identification of genes in a genome is an important step in the annotation process after a new genome is sequenced. The prediction accuracy of gene finding can be greatly improved by using experimental evidence. This evidence includes homologies between the genome and databases of known proteins, or evolutionary conservation of genomic sequence in different species. <br /><br /> We propose a flexible framework to incorporate several different sources of such evidence into a gene finder based on a hidden Markov model. Various sources of evidence are expressed as partial probabilistic statements about the annotation of positions in the sequence, and these are combined with the hidden Markov model to obtain the final gene prediction. The opportunity to use partial statements allows us to handle missing information transparently and to cope with the heterogeneous character of individual sources of evidence. On the other hand, this feature makes the combination step more difficult. We present a new method for combining partial probabilistic statements and prove that it is an extension of existing methods for combining complete probability statements. We evaluate the performance of our system and its individual components on data from the human and fruit fly genomes. <br /><br /> The use of sequence evolutionary conservation as a source of evidence in gene finding requires efficient and sensitive tools for finding similar regions in very long sequences. We present a method for improving the sensitivity of existing tools for this task by careful modeling of sequence properties. In particular, we build a hidden Markov model representing a typical homology between two protein coding regions and then use this model to optimize a component of a heuristic algorithm called a spaced seed. The seeds that we discover significantly improve the accuracy and running time of similarity search in protein coding regions, and are directly applicable to our gene finder.