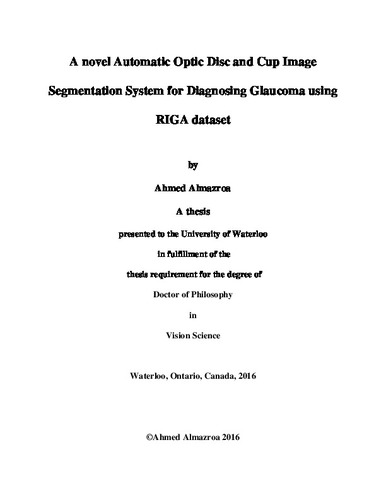 The optic nerve head (ONH) of the retina is a very important landmark of the fundus and is altered in optic nerve pathology especially glaucoma. Numerous imaging systems are available to capture the retinal fundus and from which some structural parameters can be inferred the retinal fundus camera is one of the most important tools used for this purpose. Currently, the ONH structure examination of the fundus images is conducted by the professionals only by observation. It should be noted that there is a shortage of highly trained professional worldwide. Therefore a reliable and efficient optic disc and cup localization and segmentation algorithms are important for automatic eye disease screening and also for monitoring the progression/remission of the disease Thus in order to develop a system, a retinal fundus image dataset is necessary to train and test the new software systems. The methods for diagnosing glaucoma are reviewed in the first chapter. Various datasets of retinal fundus images that are publically available currently are described and discussed. In the second chapter the techniques for the optic disc and cup segmentations available in the literature is reviewed. While in the third chapter a unique retinal fundus image dataset, called RIGA (retinal images for glaucoma analysis) is presented. In the dataset, the optic disc and cup boundaries are annotated manually by 6 ophthalmologists (glaucoma professionals) independently for total of 4500 images in order to obtain a comprehensive view point as well as to see the variation and agreement between these professionals. Based upon these evaluations, some of the images were filtered based on a statistical analysis in order to increase the reliability. The new optic disc and cup segmentation methodologies are discussed in the fourth chapter. The process starts with a preprocessing step based on a reliable and precise algorithm. Here an Interval Type-II fuzzy entropy based thresholding scheme along with Differential Evolution was applied to determine the location of the optic disc in order to determine the region of interest instead of dealing with the entire image. Then, the processing step is discussed. Two algorithms were applied: one for optic disc segmentation based on an active contour model implemented by level set approach, and the second for optic cup segmentation. For this thresholding was applied to localize the disc. The disc and cup area and centroid are then calculated in order to evaluate them based on the manual annotations of areas and centroid for the filtered images based on the statistical analysis. In the fifth chapter, after segmenting the disc and cup, the clinical parameters in diagnosis of glaucoma such as horizontal and vertical cup to disc ratio (HCDR) and (VCDR) are computed automatically as a post processing step in order to compare the results with the six ophthalmologist’s manual annotations results. The thesis is concluded in chapter six with discussion of future plans.