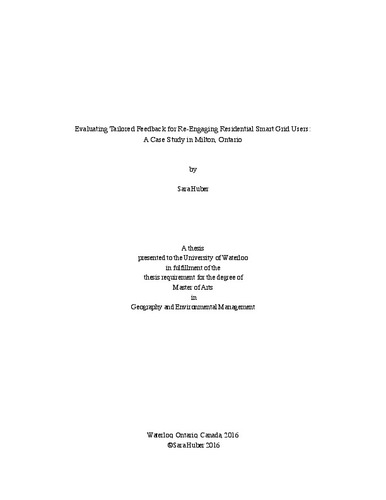 A rapidly changing climate, predominantly caused by carbon-intensive human activities, has stimulated policies and programs to reduce greenhouse gas emissions (GHG’s). One area in which GHG reductions are being made is in the electricity sector. In the province of Ontario, the shutting down of all coal fired plants in 2014 and the adding of clean energy sources have contributed to this shift away from GHG emitting fuel sources. In addition to this, the widespread adoption of smart meters, time-of-use pricing, and the fostering of a ‘conservation culture’ have been put forth to promote reductions in total and peak consumption through widespread access to electricity information. Reducing electricity consumption and shifting consumption to off-peak hours is important because it helps avoid investment in the up-keep of electricity systems, increases energy security, and decreases emissions produced from carbon-intensive sources used during times of peak demand. Electricity reporting studies have sought to provide detailed feedback in the hopes of enhancing awareness and further reducing electricity consumption. While many studies have conducted research on the effectiveness of short term feedback, this study focuses on a case study of 26 households whom have been engaged in electricity interventions over a three-year period. Previous research on this case study, found that household engagement dropped off after the first few months. Therefore, this research seeks to understand the effectiveness of feedback to re-engage long-term smart grid users. Throughout the course of a 30-week study period, households were provided with disaggregated appliance feedback and aggregate household feedback on electricity use on a weekly basis to encourage users to reduce overall consumption or to peak shift to hours of the day with a lower electricity demand. Household consumption from the monitoring period is compared to the baseline period to determine whether households made behavioural changes and reduced total or on-peak consumption. Those who achieved the greatest savings relative to the baseline period in each given month were awarded with a certificate and a public announcement of their success was delivered to all other households partaking in the study. The weekly feedback reports categorized households into quintiles based on their electricity use relative to others in the study, listing them as ‘very efficient’, ‘low consumers’, ‘average’, or ‘high consumers’, or quintile 1, 2, 3, 4/5, respectively. From this, it was determined whether higher consuming households became motivated to match the consumption of the very efficient consumers. To further encourage conservative energy practices, tips were sent out with the weekly reports to those households belonging to quintiles 3, 4, and 5, to encourage households to moderate specific appliances and reduce consumption to match that of the efficient households. Total consumption in kWh and on-peak share of the week following and month following were compared to the week and month prior to the tip. The average change the week following a tip for the AC, laundry and media centre were 0.5, 3.5, and 2.4 kWh/week, respectively, and a 0.2% increase, and reduction of 1.4%, and 2.2% in on-peak share, respectively. Based on the results of this inquiry, households at the aggregate level reduced consumption. This is attributed to the provision of feedback, the use of tips, and outside factors. On average households made reductions in total electricity consumption by 10.4% before and after the intervention, over the course of 30 weeks (not normalized for temperature). A further seasonal analysis demonstrates a decrease of 4.5% for the 12 week summer period, and a reduction of 11.5% for the 18 week fall/winter period. An analysis of quintiles found a change in use by higher consuming residential quintiles towards the lowest consuming quintile. Following the presentation of a tip, households made reductions to particular appliances in total use (AC, washer/dryer, and media centre), and peak share (washer/dryer, dishwasher, and media centre) for both the week and month analysis. On average, there is a 1.6 kWh/week reduction in the week following a tip, and a 0.4 kWh/month reduction in the month following. For the peak share, there is an average 2.6% reduction the week following a tip, while the month following there is an average 0.4% increase. Comparing this study to others in which households are newly selected for the particular study, in which there are average savings of 12.3%, this study has an average savings of 10.4%. Despite the assertion that electricity monitoring devices eventually become ‘backgrounded’ in households, (Hargreaves et al., 2013), participants were still able to make reductions in electricity consumption (in terms of total or peak share) throughout the 30 week study period, resulting in similar reductions to those found in other studies in which participants are newly engaged with feedback interventions.