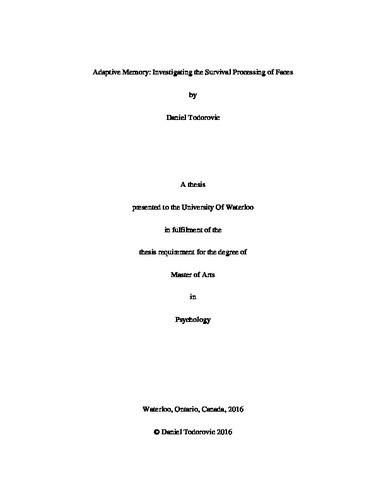 It has been consistently found that words exhibit a mnemonic benefit when processed according to their relevance to a survival scenario (Nairne, Thompson, & Pandeirada, 2007). However, when Savine, Scullin, and Roediger (2011) tested this survival processing effect for faces, they were unable to obtain the effect. If memory evolved to aid survival, then memory for threatening individuals should be enhanced. This study examined whether the survival processing effect would be obtained for faces if they were processed according to a threat-focused scenario, modified from that of Savine et al. (2011), rather than a standard survival scenario. This hypothesis was tested in a between-subjects design, utilizing male and female faces, and two different threat scenarios along with a control scenario. A marginally significant survival processing effect for faces was obtained.