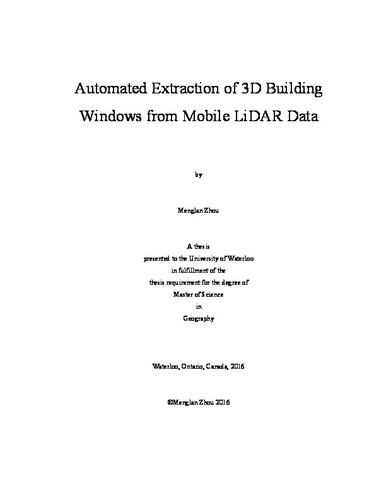 The three-dimensional (3D) city models have gained more and more attentions because of their considerable potential applications at present. In particular, the demands for Level of Detail (LoD) building models become urgent. Mobile Laser Scanning (MLS) has supplied a brand-new technology in the acquisition and update of 3D information in urban off-terrain features, particularly for building façade details. Accordingly, generating LoD3 building models from MLS point clouds becomes a new trend in recent studies. As a consequence, a method that can accurately and automatically extract 3D windows from raw MLS point clouds is presented in this thesis. To provide solid and credible information for LoD3 building models, this automated method endeavors to identify window frames on building facades from MLS point clouds. This algorithm can typically be regarded as a stepwise procedure to interpret MLS point clouds as semantic features. A voxel-based upward-growing method is firstly applied to distinguish non-ground points from ground points. Noise is then filtered out from non-ground points by statistical analysis. In order to segment out the building facades, all the remaining non-ground points are clustered based on conditional Euclidean clustering algorithm; clusters whose density and width are over a given threshold will be designated as points for building facades. After a building façade is successfully extracted, a volumetric box is created to contain façade points so that neighbours of each point can be operated. A manipulator is finally applied according to the structural characteristics of window frames to extract the potential window points. The experimental results demonstrate that the proposed algorithm can successfully extract the rectangular or curved windows in the test datasets with promising accuracies. The 2D validation and 3D validation were both conducted in this study. In the 2D validation, the lowest F-measure of the test datasets is 0.740, and the highest can be 0.977. While in the 3D validation, the lowest correctness of the test dataset is 79.58%, and the highest can be 97.96%. After further analysis of the experimental results, it was found that, for those windows concave on walls or with curtains drawn, the performance of the proposed method was influenced. Furthermore, big holes caused by system errors in raw point clouds also had negative impacts on the proposed method. In conclusion, this thesis makes a considerable contribution to extracting 3D rectangular, irregular and arc-rounded windows from noisy MLS point clouds with high accuracy and high efficiency. It has supplied a promising method for generating LoD3 building models.