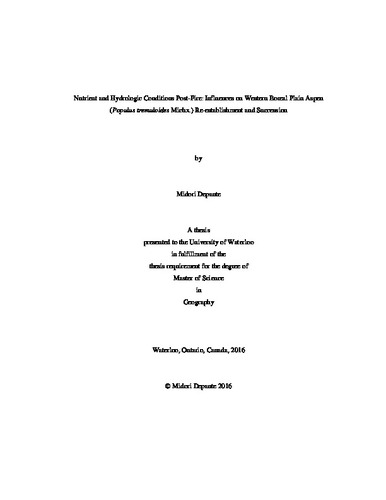 The Western Boreal Plains of Alberta (WBP) contains a mixture of peatlands and forests, with the latter dominated by trembling aspen (Populus tremuloides Michx.). Given the sub-humid climate of the WBP, where evapotranspiration (ET) often exceeds precipitation (P), uplands are usually dependent on peatlands for water supply. The process of hydraulic redistribution (HR), the transfer of water from one area to another through roots, is a mechanism by which aspen obtain moisture from peatlands. However, the effects of disturbances such as fire on this process remain unknown, and it is uncertain if connectivity between land units through HR continues post-fire. During May 2011, a wildfire affected 90 000 ha of north central Alberta including the Utikuma Region Study Area (URSA). Portions of a glacio-fluval outwash lake catchment was burned which included forests and a ~0.5 ha peatland. Within one year after the fire, aspen were detected in peatlands and at peatland margins. The purpose of this study was to monitor aspen recovery across a burned hillslope, and determine if nutrients, soil moisture conditions, or both were sufficient to permit regeneration in peatlands. The role of aspen in peatlands in forest recovery was also investigated. Across recovering land units in 2013 and 2014, plot transpiration (Eplot) measurements were taken to evaluate stress levels where on average midslope (0.42 mm hr-1) > hilltops (0.29 mm hr-1) > riparian (0.23 mm hr-1) > peatlands (0.095 mm hr-1); similar trends were observed with leaf area and stem heights. To determine if aspen required excess nutrients for regeneration, plant available nitrate (NO3-), ammonium (NH4+), and water extractable phosphorus (Ext-P) were measured in both growing seasons. While Ext-P remained elevated with the highest levels in burned peatlands, aspen stem height and leaf area were not greatly dependent on P. Similarly, negative relationships with growth were observed with increasing soil moisture content (VWC). Although VWC was below field capacity (<25%) in forests, P. tremuloides were sustained through roots present, likely before fire, in peatland margins through hydraulic redistribution. Evidence for this was observed in oxygen (δ18O) and hydrogen (δ2H) isotopes (‰) where upland xylem and peat core signatures were -10.0 ‰, -117.8 ‰ and -9.2 ‰, -114.0 ‰, respectively, highlighting their importance in hydrologically connecting forests to water sources. This study showed that while peatlands were resource rich post-fire, aspen was able to regenerate in nutrient and moisture-poor forests and that peatlands are unsuitable areas for further re-establishment. This research also highlighted the significance of hydraulic redistribution to forest recovery. The continuation of HR and water table fluctuations however, may result in soil moisture changes and the encroachment of aspen. Therefore, peat margins post-disturbance may be at risk during succession resulting in margin loss.