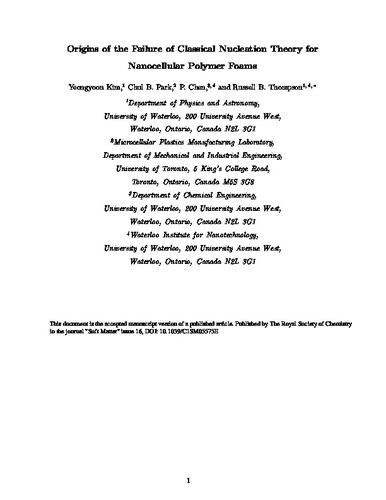 Relative nucleation rates for fluid bubbles of nanometre dimensions in polymer matrices are calculated using both classical nucleation theory and self-consistent field theory. An identical model is used for both calculations showing that classical nucleation theory predictions are off by many orders of magnitude. The main cause of the failure of classical nucleation theory can be traced to its representation of a bubble surface as a flat interface. For nanoscopic bubbles, the curvature of the bubble surface is comparable to the size of the polymer molecules. Polymers on the outside of a curved bubble surface can explore more conformations than can polymers next to a flat interface. This reduces the free energy of the curved interface which leads to a significantly smaller barrier energy to nucleation and thus a much higher nucleation rate. Also, there is a reduction of unfavorable energetic contacts between polymer and fluid molecules in the vicinity of a curved interface. Polymers on the outside of a curved interface are less likely to find a portion of themselves in the interior of the unfavorable fluid bubble. A secondary cause of the failure of classical nucleation theory is due to the collapse of the bulk region inside the bubble. As the radius of a bubble is reduced, eventually the diffuse walls collide causing increased mixing of polymer and fluid molecules everywhere. This causes a reduction of internal energy associated with the interface, leading to smaller nucleation barrier energies and, again, a reduced barrier energy to nucleation.