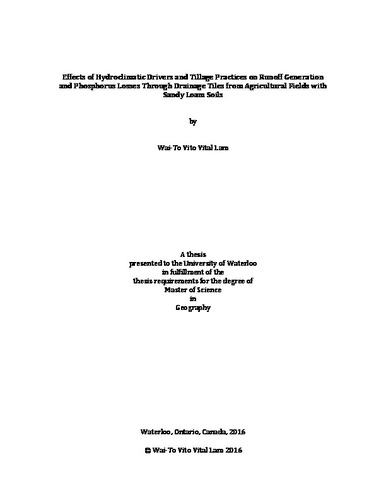 Effluent from agricultural tile drains has been identified a source of phosphorus (P) to water bodies, contributing to algal blooms and water quality degradation. Reduced till (RT) or no-till are Best Management Practices (BMP) often used to limit the export of particulate P (PP) in runoff. However, existing research has shown that no-till may increase losses of dissolved reactive phosphorus (DRP) in tile drains. Much of the existing knowledge has been generated in clay soil, where preferential transport between the surface and tile drains prevails. Moreover, much of the previous work done has been done during the growing season. It is unclear if, and how P losses under RT tillage practices compare to those under annual tillage (AT) in the sandy loam soils of southern Ontario, and, how these BMPs perform year-round in climates where snowmelt accounts for significant amount of annual runoff. The objectives of this research are to quantify year-round losses of runoff, DRP and total phosphorus (TP) from tile drains beneath RT and AT plots and to demonstrate the role of seasonality on losses. This research also relates biogeochemical and hydrological responses in drainage tiles to precipitation inputs and antecedent soil moisture conditions as drivers of effluent and P-export. Tile runoff and chemistry were monitored for a 28-month period at two adjacent sites under similar management practices. Both runoff and P-export were episodic across all plots, with the majority of annual losses occurring during a few key events under heavy precipitation or snowmelt. Most losses occurred during the non-growing season between October and May. Tillage methods did not affect DRP or TP concentrations or loads in tile drain effluent. Tile discharge and responses were governed by soil moisture conditions such that flow only occurred at soil moisture conditions that fell above a threshold value (above field capacity, near saturation). Runoff responses during the non-growing season were high because soils sit at or close to this threshold consistently. Strong relationships were found between volume of discharge and DRP and TP loads, indicating that with known baseline conditions, simple hydrometric data may be able to predict biogeochemical and hydrologic responses in drainage tiles under sandy loam soils. This study emphasizes the importance of the non-growing season and snowmelt in annual P losses from tile drains, illustrating that BMPs must be effective during the winter months to reduce P losses. The cumulative BMPs used at the study site appear to be fairly effective at minimizing P losses in tile drain effluent under both RT and AT plots. This study also provides useful insight for modeling runoff and P losses in tile drainage.