The Impact of Glaciation and Permafrost on Groundwater Flow 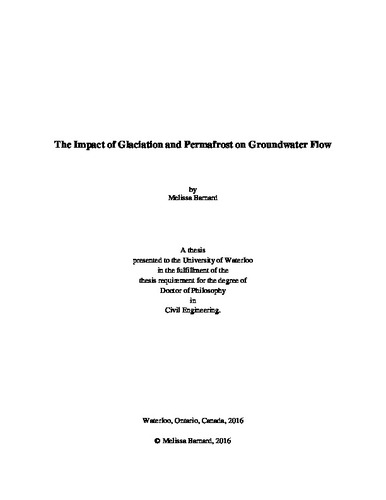 Current geologic and climatic conditions need to be considered when choosing an appropriate site for a Deep Geologic Repository (DGR). However, given the million-year timeframe for the radioactivity of the used fuel to reduce to that of its natural uranium content and the record of repeated glacial cycles in the Northern hemisphere over the past million years, the impact of glaciation on the DGR also needs to be considered. Simplifying assumptions are often made in such paleo-climate modelling analyses involving permafrost and glaciation and include the assumptions that fluid flow is isothermal and fully-saturated and the phreatic surface in the permafrost is within metres of the topographic surface. Those assumptions were examined using a modelling approach that included thermal transport and flow conditions with an alternate conceptualization of the water table boundary conditions to develop a more detailed representation of the impact and glacial and periglacial conditions on the groundwater flow system. Two computational models, FRAC3DVS-OPG and COMSOL Multiphysics, were used to carry out those investigations. The numerical models of the Greenland Analogue Project (GAP) study site that investigated groundwater flow and permafrost near the edge of the Greenland Ice Sheet (GIS) and a proposed DGR site in Southern Ontario were used to examine the impact of permafrost on the water table for fully-saturated and variably-saturated flow conditions. Those analyses demonstrated that with the presence of permafrost, the use of a prescribed head boundary condition did not allow drainage that may occur when the recharge to permafrost is set to zero. Permafrost will not allow enough recharge to maintain fully-saturated conditions, and the system will drain beneath it.