Bruxy Cavey and The Meeting House Megachurch: A Dramaturgical Model of Charismatic Leadership Performing “Evangelicalism for People Not Into Evangelicalism” 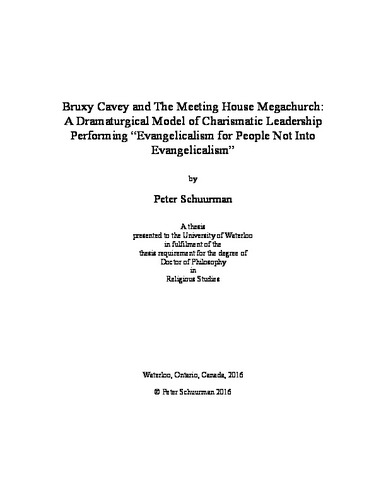 Megachurch pastors—as local and international celebrities—have been a growing phenomenon since the 1960s, when megachurches began to proliferate across North America. Why are these leaders and their large congregations so popular in an age of increasing “religious nones”? Commentators in both popular and academic literature often resort to characterizing the leadership with stereotypes of manipulative opportunists along the lines of Sinclair Lewis’ Elmer Gantry (1927) or narrow characterizations of savvy entrepreneurs who thrive in a competitive religious economy. Similarly, writers assume megachurch attendees are a passive audience, or even dupes. This dissertation challenges the Elmer Gantry stereotype and the religious economic perspectives by examining one particular megachurch pastor named Bruxy Cavey in the context of his “irreligious” megachurch community called The Meeting House. It argues that charismatic leadership, not calculated management and branding techniques, best explains the rapid growth of this megachurch as well as the deep commitments many people make to it. While the concept of “charisma” is often used equivocally, in the tradition of Max Weber I contend that charismatic authority is best understood not only as an extraordinary individual quality but as a form of cultural authority that arises when traditional and institutional forms have lost their plausibility and people experience uncertainty, dissatisfaction, or distress. People attribute exemplary powers to someone who offers them a way out, and intellectually and emotionally bond with the visionary and their vision. This charismatic authority I portray as a dramatic production, what I call a “dramatic web” that draws followers into its scene and script, offering some resolution to their worries. The complex, compelling nature of this drama is best understood in the context of Wendy Griswold’s “cultural diamond,” which proposes four elements in the analysis of a cultural object: the cultural object itself, its creators, its receivers, and the social world that encapsulates them all. I investigate the four elements as part of a “charismatic diamond”: the cultural object is the “dramatic web” of Cavey’s church, marketed as “a church for people who aren’t into church”; the creators are Cavey and his staff, who employ a variety of media to generate and disseminate the drama; the social world is a Canadian culture ambivalent about religion and which stigmatizes right-wing evangelicals; the receivers are various concentric circles of audience who participate in the subculture of the church to varying degrees. Following the dramaturgical themes of Erving Goffman, I investigate the “dramatic web” of The Meeting House in two parts—as a deconstructive, satirical project displayed on Sunday mornings and then as a re-constructive, romantic adventure that is exemplified in weekday Home Churches. For the first, I show Cavey deliberately takes “role distance” from the stereotype of a right-wing evangelical pastor, using satire to deconstruct the mores of North American evangelical culture and create an “alienating effect” in his audience. The negatively oriented opening acts create a space in which a new script can be constructed, and I demonstrate next Cavey’s two core romantic narratives that champion “relationship, not religion”—a script that is to be enacted through their weekday Home Churches. Not all attendees are caught up in this dramatic web to the same degree, however, as attendees select elements from it for their own purposes, some embracing and identifying with the whole script, while others take pieces from it to arrange into a more eclectic religious life. The final chapter explores moments of “dramaturgical trouble,” including the question of what happens when Cavey retires, dies, or is deposed. In other words, how might this religious performance come to an end? I offer a typology of possible endings and their sequels—three scenarios of charismatic succession I developed from Weber’s writing on the routinization of charisma. The dissertation concludes by suggesting that, contrary to predictions of the megachurches demise, if megachurches indeed are a compelling drama co-produced by leader and follower that brings meaning, purpose, and joy to followers’ lives in the midst of cultural tension, megachurches are not just a passing fad or vulnerable personality cult, but a viable and likely enduring North American religious institution.