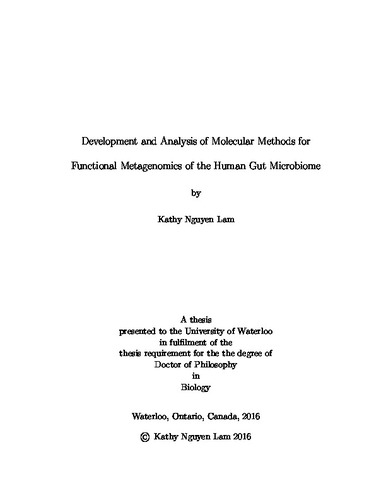 Interest in the human microbiome has risen quickly in recent years as the microbes that live in and on our body have been implicated in a growing number of human health and disease states. This interest has been supported by advances in DNA sequencing technology that have allowed us to obtain vast amounts of sequence data, and yet we have difficulty assigning function to many of the gene sequences obtained. As research on the role of these microorganisms continues, there will be an increased need for high-throughput methods that can provide knowledge of microbial gene function. Functional metagenomics is one such method, and it relies on first cloning environmental DNA to generate metagenomic libraries that are maintained in Escherichia coli and second, screening the cloned DNA for particular functions of interest. This powerful function-first method allows for the isolation of genes whose role may not have been predicted using DNA sequence homology. This thesis describes the analysis of techniques used in functional metagenomics research, as well as the development of new strategies to aid in functional screening of metagenomic libraries, particularly those constructed from gut-derived DNA. The work is divided into four data chapters that each explore a distinct aspect of the functional metagenomics approach. The first data chapter describes the evaluation of a pooled strategy for sequencing cosmid clones that were previously isolated in functional screens of metagenomic libraries. Ninety-two large-insert clones were pooled for Illumina-sequencing and the assembled sequence data were evaluated against reference sequence data that were obtained from individual barcoded Illumina sequencing of the same clones. The results indicated that a pooled strategy works well provided that sufficient sequencing depth is obtained and that pooled clones do not share sequence similarity to the extent that would be problematic for assembly of short reads that derive from those clones. The second data chapter is an exploration of possible causes for the known cloning bias of metagenomic libraries, by comparing environmental DNA before cloning to the DNA cloned in the final metagenomic library in E. coli. For a human gut metagenomic library, DNA was sampled and Illumina-sequenced at three different steps during the construction of the library. Analyses of the sequence data showed that there was indeed major bias in the final library, but that the bias was not due to fragmentation of the DNA during the cloning process as has been previously suggested; rather, the data were consistent with alternative hypotheses that suggest bias occurs after the DNA is introduced into E. coli, and analyses provide support for the hypothesis that spurious transcription of foreign DNA in E. coli may be contributing to the bias of libraries. Bias was also examined for a soil metagenomic library using 16S rRNA gene sequencing and though broad phylum-level biases were not as severe as observed for the human gut library, analyses revealed a bias in the relative abundance of individual OTUs. The third data chapter describes efforts to develop Bacteroides thetaiotaomicron (B. theta) VPI-5482 as a surrogate host for screening metagenomic libraries constructed from human gut-derived DNA. In this strategy, metagenomic libraries that have been constructed in E. coli can be transferred to B. theta using triparental conjugation. A member of the Bacteroidetes was chosen to specifically address the likely barrier to gene expression in E. coli of DNA that originates from this phylum. To allow the library to be replicated in B. theta, a B. theta-compatible library cloning vector was constructed, and this vector was used to generate genomic and metagenomic clone libraries. A metagenomic library was successfully screened in B. theta, leading to functional complementation of a B. theta mutant strain unable to grow on chondroitin sulfate as sole carbon source. However, further examination of the complemented clones indicated that the library clone DNA had integrated into the B. theta mutant genome. To address this problem, an alternative method for screening was devised, and although this method demonstrates that screening in B. theta remains feasible, more work is required to optimize the conjugation efficiency and the level of throughput. The fourth and last data chapter is an exploration of the use of transcriptional terminator elements in library cloning vectors, inspired by the results of previous chapters. Two unidirectional transcriptional terminators were added to a copy number-inducible fosmid vector, flanking the cloning site, with the intention of reducing insert-born transcription into the vector backbone. The terminators were tested using a reporter gene to confirm their functionality in this context, and derivative vectors were generated for future testing of whether or in what contexts terminators may help alleviate cloning bias in metagenomic libraries. The work described in this thesis contributes to method advancement for functional metagenomics through the analysis of a cost-effective strategy for sequencing library clones, the examination of potential causes of sequence bias in metagenomic libraries, the development of a surrogate host for more productive functional screening, and the consideration of vector elements that may improve metagenomic library stability in E. coli.