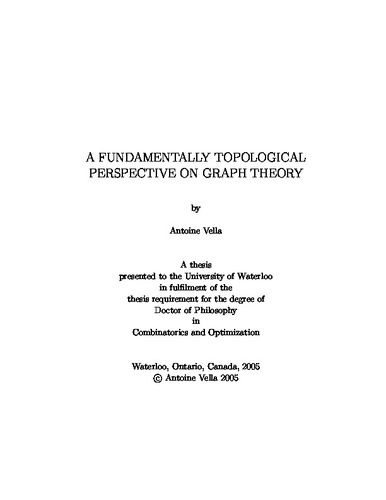 We adopt a novel topological approach for graphs, in which edges are modelled as points as opposed to arcs. The model of classical <i>topologized graphs</i> translates graph isomorphism into topological homeomorphism, so that <i>all</i> combinatorial concepts are expressible in purely topological language. This allows us to extrapolate concepts from finite graphs to infinite graphs equipped with a compatible topology, which, dropping the classical requirement, need not be unique. We bring standard concepts from general topology to bear upon questions of a combinatorial inspiration, in an infinite setting. We show how (possibly finite) graph-theoretic paths are, without any technical subterfuges, a subclass of a broad category of topological spaces, namely paths, that includes Hausdorff arcs, the real line and all connected orderable spaces (of arbitrary cardinality). We show that all paths, and the topological generalizations of cycles, are topologized graphs. We use feeble regularity to explore relationships between the topologies on the vertex set and the whole space. We employ compactness and weak normality to prove the existence of our analogues for minimal spanning sets and fundamental cycles. In this framework, we generalize theorems from finite graph theory to a broad class of topological structures, including the facts that fundamental cycles are a basis for the cycle space, and the orthogonality between bond spaces and cycle spaces. We show that this can be accomplished in a setup where the set of edges of a cycle has a loose relationship with the cycle itself. It turns out that, in our model, feeble regularity excludes several pathologies, including one identified previously by Diestel and Kuehn, in a very different approach which addresses the same issues. Moreover, the spaces surgically constructed by the same authors are feebly regular and, if the original graph is 2-connected, compact. We consider an attractive relaxation of the <i>T</i><sub>1</sub> separation axiom, namely the <i>S</i><sub>1</sub> axiom, which leads to a topological universe parallel to the usual one in mainstream topology. We use local connectedness to unify graph-theoretic trees with the dendrites of continuum theory and a more general class of well behaved dendritic spaces, within the class of <i>ferns</i>. We generalize results of Whyburn and others concerning dendritic spaces to ferns, and show how cycles and ferns, in particular paths, are naturally <i>S</i><sub>1</sub> spaces, and hence may be viewed as topologized hypergraphs. We use topological separation properties with a distinct combinatorial flavour to unify the theory of cycles, paths and ferns. This we also do via a setup involving total orders, cyclic orders and partial orders. The results on partial orders are similar to results of Ward and Muenzenberger and Smithson in the more restrictive setting of Hausdorff dendritic spaces. Our approach is quite different and, we believe, lays the ground for an appropriate notion of completion which links Freudenthal ends of ferns simultaneously with the work of Polat for non-locally-finite graphs and the paper of Allen which recognizes the unique dendritic compactification of a rim-compact dendritic space as its Freudenthal compactification.