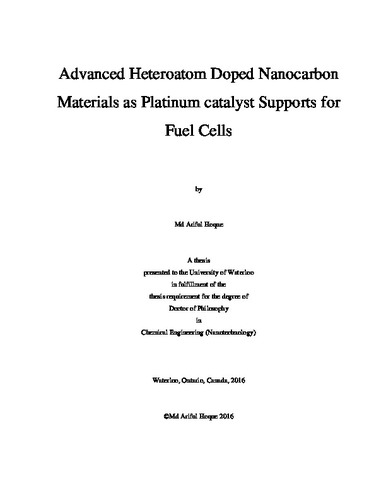 The pressing demand for high performance, operationally stable and inexpensive electrocatalyst materials for proton exchange membrane fuel cells (PEMFCs) has spurred significant research and development interest in this field. Until now, fuel cells based on commercially available Pt/C electrocatalysts have not met some of the technical challenges to the widespread commercial adoption of PEMFCs. The main issues associated with the commercial validity of PEMFCs are the high cost and inadequate long term operational stability of Pt/C catalysts typically used to facilitate the inherently sluggish oxygen reduction reaction (ORR). Therefore, the replacement of Pt/C with novel and more effective catalyst materials is critical. These expensive precious metal catalysts make up a large portion of the overall PEMFC stack cost and suffer degradation under harsh potentiodynamic conditions. Therefore, careful electrocatalyst design strategies must be developed to reduce the cost of ORR catalysts with sufficient activity and stability to meet the technical targets set for the use of PEMFCs. In this work, two approaches are applied to develop new electrocatalyst materials for PEMFCs. The first is to design unique sulfur-doped graphene (SG) and sulfur-doped CNT (S-CNT) supports with the objective of replacing the traditional carbon black to enhance stability toward carbon corrosion. The second is to deposit Pt nanoparticles and nanowires onto SG and S-CNT with the objective of exceeding the activity and stability possible with conventional catalysts. These two catalyst technologies are developed with the ultimate objective of integrating the Pt electrodes into membrane electrode assembly (MEA) to provide excellent PEMFC performance. The first study focuses on the use of SG prepared by a thermal shock/quench anneal process as a unique Pt nanoparticle support (Pt/SG). These materials are subjected to a variety of physicochemical characterizations and electrochemical investigation for the ORR. Based on half-cell electrochemical testing in acidic electrolyte, Pt/SG demonstrated increased ORR activity and unprecedented stability over the state-of-the-art commercial Pt/C, maintaining 87% of its electrochemically active surface area following accelerated durability testing. Density functional theory (DFT) calculations highlighted that the interactions between Pt and graphene are enhanced significantly by sulfur doping, leading to a tethering effect that can explain the outstanding electrochemical stability. Furthermore, sulfur dopants resulted in a downshift of the Pt d-band center, explaining the excellent ORR activity and rendering SG as a new and highly promising class of catalyst supports for electrochemical energy technology and PEMFCs. The beneficial impacts of SG support can be utilized by growing more stable nanostructures such as Pt nanowires on SG to further improve the activity and stability of Pt catalysts. Toward this end, we carried out the direct growth of platinum nanowires on SG (PtNW/SG) by a simple, surfactant free solvothermal technique. The growth mechanism, including Pt nanoparticle nucleation on SG, followed by nanoparticle attachment with orientation along the <111> direction is also highlighted. PtNW/SG demonstrated increased Pt mass activity and a specific activity that is 188% higher than state-of-the-art commercial Pt/C catalysts. Most notably, under a harsh potentiodynamic condition (potential cycles: 3000, potential range: 0.05 to 1.5 V vs RHE), PtNW/SG retained 58% of its electrochemically active surface area and 67% of its ORR activity in comparison to Pt/C that retained less than 1% of its surface area and activity and so failed. Given the evidence that SG is a promising support for Pt catalysts, the next logical step is to investigate the influence of sulfur on catalytic materials. Accordingly, we study the effects of sulfur on the electrochemical activity and stability of various SG supported platinum nanowires (PtNW/SGs). To investigate the influence of sulfur, a series of SG materials with varying sulfur contents ranging from 0.35 to 3.95 at% are investigated as Pt nanowire catalyst supports. Based on the physico-chemical characterizations, electrochemical measurements and DFT calculations, the amount of sulfur is shown to significantly affect the electrokinetics of the Pt nanowires. The best ORR kinetics are observed for the Pt nanowires supported on graphene with 1.40 at% sulfur. At higher sulfur contents, further enhancements are not observed, and in fact, leads to a loss of activity. At lower sulfur contents, the beneficial role of sulfur does not have a marked impact on performance so that the characteristics and performance more closely resemble that obtained with undoped graphene supports. Obviously, the beneficial effect of sulfur dopant species can be utilized by doping sulfur into other types of carbon supports such as CNT (S-CNT). Finally, we report on the synthesis, characterization and electrochemical evaluation of S-CNT-supported Pt nanowires (PtNW/S-CNT). PtNW/S-CNT synthesized by a modified solvothermal method demonstrated an increased mass activity and a specific activity 570% higher than state-of-the-art Pt/C. The stability of PtNW/S-CNT is also shown to be very impressive through accelerated degradation testing. Only insignificant changes to the electrochemically active surface area (ECSA, 93% retention) and mass activity (81% retention) of PtNW/S-CNT are observed over the course of cycling, in contrast to sizable losses observed with commercial Pt/C (<1% retention in ECSA and mass activity) under same conditions.