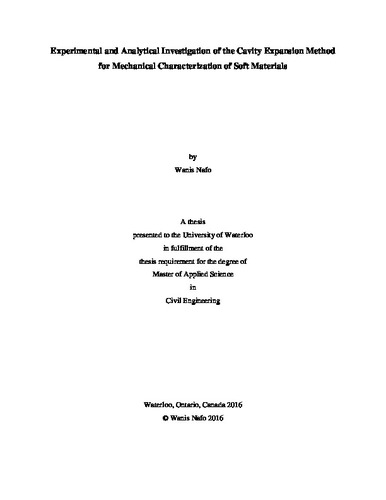 In biomedical engineering, the mechanical properties of biological tissues are commonly determined by using conventional methods such as tensile stretching, confined and unconfined compression, indentation and elastography. With the exception of elastography, most techniques are implemented on ex-vivo soft tissue samples. This study evaluated a newly developed technique that has the potential to measure the mechanical properties of soft tissues in their in-vivo condition. This technique is based on the mechanics of internal spherical cavity expansion inside soft materials. Experimental, mathematical and numerical investigations were conducted. Experimentally, the pressure-cavity volume relationship was measured using two types of polyvinyl alcohol (PVA) hydrogels of different stiffnesses, namely Sample1 and Sample 2. In addition, unconfined compression tests were conducted to measure the stress-strain relationship of the two gels. Based on the cavity expansion test results, the measured pressure-volume data was translated into the stress-strain relationship using a mathematical model. The stiffness of the two gels was then compared to that determined by the unconfined compression technique. The resulting stiffness of the two techniques was then compared at overlapping range of strains, with the average percentage of difference being 8.46% for Sample1 and 5.36% for Sample 2. A numerical model was developed to investigate the analytical solution of the new technique. This investigation was based on verifying the displacement predicted by the analytical solution. The promising outcome of the technique encouraged extending this study to include bovine liver tissues. A tissue sample was extracted from a bovine liver and subjected to tensile loading to evaluate its stiffness. The result was a stiffness of 76.92 kPa. A second sample of the same bovine liver was evaluated using the spherical expansion technique which resulted in a stiffness of 87.94 kPa.