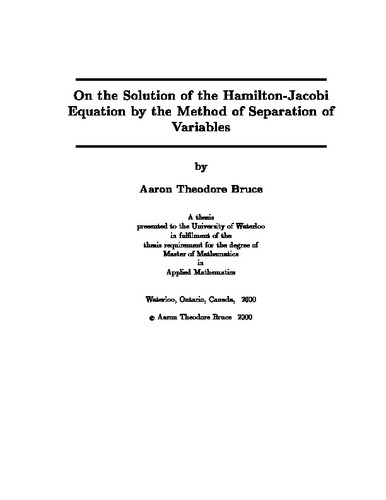 The method of separation of variables facilitates the integration of the Hamilton-Jacobi equation by reducing its solution to a series of quadratures in the separable coordinates. The case in which the metric tensor is diagonal in the separable coordinates, that is, orthogonal separability, is fundamental. Recent theory by Benenti has established a concise geometric (coordinate-independent) characterisation of orthogonal separability of the Hamilton-Jacobi equation on a pseudoRiemannian manifold. It generalises an approach initiated by Eisenhart and developed by Kalnins and Miller. Benenti has shown that the orthogonal separability of a system via a point transformation is equivalent to the existence of a Killing tensor with real simple eigen values and orthogonally integrable eigenvectors. Applying a moving frame formalism, we develop a method that produces the orthogonal separable coordinates for low dimensional Hamiltonian systems. The method is applied to a two dimensional Riemannian manifold of arbitrary curvature. As an illustration, we investigate Euclidean 2-space, and the two dimensional surfaces of constant curvature, recovering known results. Using our formalism, we also derive the known superseparable potentials for Euclidean 2-space. Some of the original results presented in this thesis were announced in [8, 9, 10].

Aaron Bruce (2000). On the Solution of the Hamilton-Jacobi Equation by the Method of Separation of Variables. UWSpace. http://hdl.handle.net/10012/1031