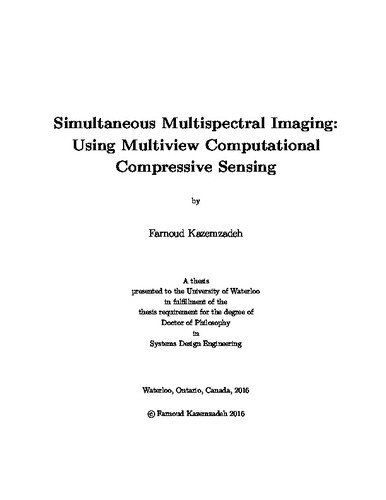 Multispectral imaging is traditionally performed using a combination of an imaging device with a filter bank such as a filter wheel or a form of tunable filter, or a combination of many imaging devices with various spectral beam splitting optics. The complexity and size of these devices seem to be the limiting factor of their adoption and use in various fields that could potentially benefit from this imaging modality. With the advent of nanophotonics, there has been a surge in single camera, snapshot, multispectral imaging exploiting the capabilities of nanotechnology to devise pixel-based spectral filters. This new form of sensing, which can be classified as compressive sensing, has its limitations. One example is the laborious process of fabricating the filter bank and installing it into a detector since the detector fabrication process is completely removed from the filter fabrication process. The work presented here will describe an optical design that would enable a single-camera, simultaneous multispectral imaging via multiview computational compressive sensing. A number of points-of-view (POVs) of the field-of-view (FOV) of the camera are generated and directed through an assortment of spectral pre-filters en route to the camera. The image of each of the POVs is then captured on a different spatial location on the detector. With the spectral response of the detector pixels well characterized, spatial and spectral compressive sensing is performed as the images are recorded. Various computational techniques are used in this work which would: register the images captured from multiple views resulting in even more sparsely sensed images; perform spatial interpolation of the sparsely sampled spectral images; implement hyper-focusing of the images from all POVs captured as some defocusing will happen as the result of the discrepancy in the optical paths in each view; execute numerical dimensionality reduction analysis to extract information from the multispectral images. The spectral imaging capabilities of the device are tested with a collection of fluorescent microspheres. The spectral sensing capability of the device is examined by measuring the fluorescent spectra of adulterated edible oils and demonstrating the ability of the imaging system to differentiate between various types of oil as well as various levels of contamination. Lastly, the system is used to scrutinize samples of black ink from different pen manufacturers, and is able to discriminate between the different inks.