Synthesis, Fabrication of Graphene Oxide Membranes, and Controlling Their Diffusion by Thermal Reduction 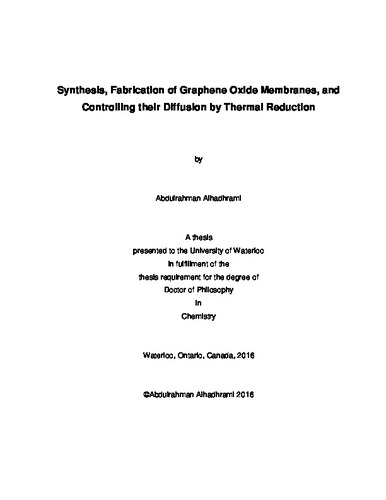 Graphene and graphene oxide have many applications in different fields such as electronic devices, electrochemical energy storage, catalysis, polymer composite, and liquid crystal devices. Oxidation of graphite to graphite oxide permits the separation of its newly formed graphene oxide molecular layers. Graphene oxide, easily deposited in the form of a film through vacuum filtration, can be partially reduced by various methods to imperfectly restore the π-network system of graphene. Reduced graphene oxide (rGO) films possess functional properties with practical applications. The main objective of this research is to carry out controlled extents of thermal reduction of graphene oxide to manipulate the d-spacing of the layers within the partially reduced films to optimize their characteristics with respect to metal ion diffusion across the films. In addition to this main objective, several other features of rGO were explored, including mechanical properties and electrical conductivity. Since GO is an electrical insulator, thermal or chemical reduction methods must be utilized in order to make it electrically conducting. Both of these methods have been used in this thesis. In the first project, the primary aim of this work, reduction of GO films was done via thermal treatment (60, 180, 200, 225, 250, and 300 °C) and also by ascorbic acid as well as hydrazine vapour. Chemical cross-linking (Na+, Mg2+, Ba2+, Fe2+, Fe3+) was performed to explore the reduction in the d-spacing between reduced GO layers. Tensile strength test was conducted on non-reduced and the GO films reduced at different temperatures to investigate their strength. In the second project, thermally reduced GO films were used in diffusion studies of 100 mM NaCl and 100 mM CaCl2. Current-voltage measurements were also conducted on these films to investigate the impact of the change in the d-spacing by thermal treatment on their electrical conductivity. In the third project, ZnO nanorods were grown on GO film by hydrothermal method and colloidal ZnO as well as GO-ZnO composite were prepared and then used in photodegradation of methylene blue as organic pollutant. In the forth project, ZnO nanorods were incorporated between reduced GO layers so that they would segregate the reduced GO layers to provide a large surface area, after which manganese divalent ions were added to form manganese dioxide so that greater charge can be stored, hence increasing the capacitance of these films for energy storage. Finally, surface potential was applied to these films to explore its influence on the diffusion of 100 mM CaCl2 through different thermally reduced GO films. Based on the results, the d-spacing for GO films was reduced from 7.36 to 4.59 Å on increasing the temperature of thermal reduction from 60 °C to 250 °C. This impacts both the in-plane and out of plane electrical conductivity of the GO films and also their diffusion characteristics. The in-plane electrical conductivity increases by over seven orders of magnitude between 60 °C and 250 °C, and the out-of-plane electrical conductivity also increases by over six orders of magnitude. Similarly, the diffusional resistance for NaCl increases by over 500 times and that of CaCl2 by over 60 times. Powder XRD, SEM, FTIR spectroscopy, Raman spectroscopy, XPS, UV-vis spectroscopy, and TGA were conducted to confirm the phase, morphology, reduction, and thermal stability of these films.