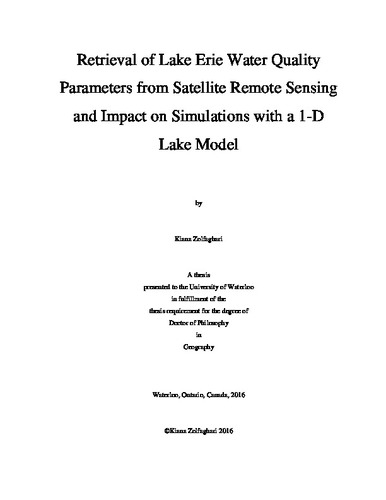 Lake Erie is a freshwater lake, and the most southern of the Laurentian Great Lakes in North America. It is the smallest by volume, the fourth largest in surface area (25,700 km2), and the shallowest of the Laurentian Great Lakes. The lake’s high productivity and warm weather in its watershed has attracted one-third of the total human population of the Great Lake’s basin. The industrial and agricultural activities of this huge population has caused serious environmental problems for Lake Erie namely harmful algal blooms, dissolved organic/inorganic matters from river inputs, and sediment loadings. If these sorts of water contaminations exceed a certain level, it can seriously influence the lake ecosystem. Hence, an effective and continuous water quality monitoring program is of outmost importance for Lake Erie. The use of Earth observation satellites to improve monitoring of environmental changes in water bodies has been receiving increased attention in recent years. Satellite observations can provide long term spatial and temporal trends of water quality indicators which cannot be achieved through discontinuous conventional point-wise in situ sampling. Different regression-based empirical models have been developed in the literature to derive the water optical properties from a single (or band ratio of) remote sensing reflectance (radiance). In situ measurements are used to build these regressions. The repeated in situ measurements in space and/or time causes clustered and correlated data that violates the assumption of regression models. Considering this correlation in developing regression models was one of the topics examined in this thesis. More complicated semi-analytical models are applied in Case II waters, aiming to distinguish several constituents confounding water-leaving signals more effectively. The MERIS neural network (NN) algorithms are the most widely used among semi-analytical models. The applicability of these algorithms to derive chl-a concentration and Secchi Disk Depth (SDD) in Lake Erie was assessed for the first time in this thesis. Satellite-observations of water turbidity were then coupled with a 1-D lake model to improve its performance on Lake Erie, where the common practice is to use a constant value for water turbidity in the model due to insufficient in situ measurements of water turbidity for lakes globally. In the first chapter, four well-established MERIS NN algorithms to derive chl-a concentration as well as two band-ratio chl-a related indices were evaluated against in situ measurements. The investigated products are those produced by NN algorithms, including Case 2 Regional (C2R), Eutrophic (EU), Free University of Berlin WeW WATER processor (FUB/WeW), and CoastColour (CC) processors, as well as from band-ratio algorithms of fluorescence line height (FLH) and maximum chlorophyll index (MCI). Two approaches were taken to compare and evaluate the performance of these algorithms to predict chl-a concentration after lake-specific calibration of the algorithms. First, all available chl-a matchups, which were collected from different locations on the lake, were evaluated at once. In the second approach, a classification of three optical water types was applied, and the algorithms’ performance was assessed for each type, individually. The results of this chapter show that the FUB/WeW processor outperforms other algorithms when the full matchup data of the lake was used (root mean square error (RMSE) = 1.99 mg m-3, index-of-agreement (I_a) = 0.67). However, the best performing algorithm was different when each water optical type was investigated individually. The findings of this study provide practical and valuable information on the effectiveness of the already existing MERIS-based algorithms to derive the trophic state of Lake Erie, an optically complex lake. Unlike the first chapter, where physically-based and already trained algorithms were implemented to evaluate satellite derived chl-a concentration, in the next chapter, two lake-specific, robust semi-empirical algorithms were developed to derive chl-a and SDD using Linear Mixed Effect (LME) models. LME considers the correlation that exists in the field measurements which have been repeatedly performed in space and time. Each developed algorithm was then employed to investigate the monthly-averaged spatial and temporal trends of chl-a concentration and water turbidity during the period of 2005-2011. SDD was used as the indicator of water turbidity. LME models were developed between the logarithmic scale of the parameters and the band ratio of B7:665 nm to B9:708.75 nm for log10chl-a, and the band ratio of B6:620 nm to B4:510 nm for log10SDD. The models resulted in RMSE of 0.30 for log10chl-a and 0.19 for log10SDD. Maps produced with the two LME models revealed distinct monthly patterns for different regions of the lake that are in agreement with the biogeochemical properties of Lake Erie. Lastly the water turbidity (extinction coefficient; Kd) of Lake Erie was estimated using the globally available satellite-based CC product. The CC-derived Kd product was in a good agreement with the SDD field observations (RMSE=0.74 m-1, mean bias error (MBE)=0.53 m-1, I_a=0.53). CC-derived Kd was then used as input for simulations with the 1-D Freshwater Lake (FLake) model. An annual average constant Kd value calculated from the CC product improved simulation results of lake surface water temperature (LSWT) compared to a “generic” constant value (0.2 m-1) used in previous studies (CC lake-specific yearly average Kd value: RMSE=1.54 ºC, MBE= -0.08 ºC; generic constant Kd value: RMSE=1.76 ºC, MBE= -1.26 ºC). Results suggest that a time-independent, lake-specific, and constant Kd value from CC can improve FLake LSWT simulations with sufficient accuracy. A sensitivity analysis was also conducted to assess the performance of FLake to simulate LSWT, mean water column temperature (MWCT) and mixed layer depth (MLD) using different values of Kd. Results showed that the model is very sensitive to the variations of Kd, particularly when Kd value is below 0.5 m-1. The sensitivity of FLake to Kd variations was more pronounced in simulations of MWCT and MLD. This study shows that a global mapping of the extinction coefficient can be created using satellite-based observations of lakes optical properties to improve the 1-D FLake model. Overall, results from this thesis clearly demonstrate the benefits of remote sensing measurements of water quality parameters (such as chl-a concentration and water turbidity) for lake monitoring. Also, this research shows that the integration of space-borne water clarity (extinction coefficient) measurements into the 1-D FLake model improves simulations of LSWT.