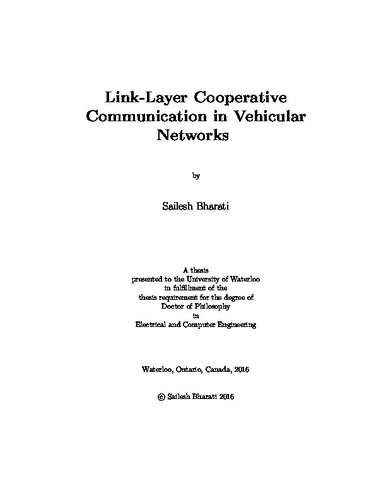 Vehicular ad hoc networks (VANETs) are a special kind of communication networks and possess unique characteristics as compared with general mobile ad hoc networks (MANETs), where vehicles communicate with each other or with stationary road side units. Hence, directly applying the existing communication protocols designed for MANETs may not be reliable and efficient in VANETs. Thus, this thesis presents link-layer cooperative frameworks to improve transmission reliability and network throughput over distributed TDMA MAC protocols for VANETs. We present a link-layer node cooperation scheme for VANETs, referred to as Cooperative ADHOC MAC (CAH-MAC). In CAH-MAC, neighboring nodes cooperate to utilize unused time slots to retransmit failed packets. Throughput improvement is achieved by using idle time slots that are wasted in the absence of node cooperation. In addition, as a packet is retransmitted earlier by a relay node, transmission delay and packet dropping rate are reduced. We study the effects of a dynamic networking environment on the performance of CAH-MAC. It is observed that, system performance degrades due to cooperation collisions. To tackle this challenge, we present an enhanced CAH-MAC (eCAH-MAC) scheme. In eCAH-MAC, using different types of packet and by delaying or suspending some relay transmissions, cooperation collisions can be avoided and cooperation opportunities can be efficiently utilize without disrupting the normal operations of the distributed TDMA MAC. We propose a node cooperation based makeup strategy for vehicular networks, referred to as cooperative relay broadcasting (CRB), such that neighboring nodes proactively rebroadcast the packet from a source node. An optimization framework is developed to provide an upper bound on the CRB performance with accurate channel information. Further, we propose a channel prediction scheme based on a two-state first-order Markov chain, to select the best relaying node for CRB. As packets are repeatedly broadcasted by the neighboring nodes before they expire, the proposed CRB framework provides a more reliable broadcast service as compared with existing approaches. The proposed node cooperation frameworks enhance the performance of distributed TDMA MAC and make it more robust to tackle VANET's dynamic networking conditions.