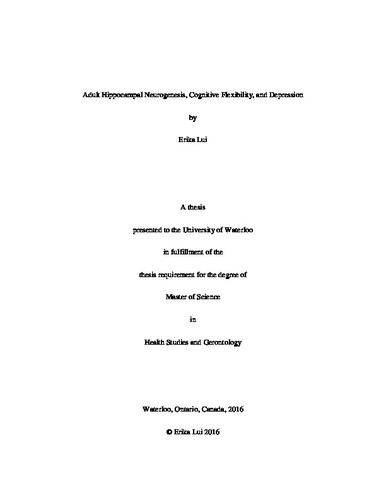 Depression is a serious and complex mental health disorder that is becoming increasingly prevalent, and is among the leading causes of global disease burden. Although depression is thought to be primarily an affective disorder, there is growing evidence that it is associated with memory deficits. Adult hippocampal neurogenesis has been implicated in depression and may also contribute to cognitive flexibility. Therefore, the present study used an animal model of depression involving chronic corticosterone (CORT) injections to assess learning and memory, and changes in adult hippocampal neurogenesis. In Experiment I, rats were randomized to receive either CORT (40 mg/kg) or vehicle injections for 21 days. On the second day of treatment, all rats received injections of BrdU to label newborn neurons. Six days before the end of the CORT treatment, rats were subjected to behavioural testing in the Morris water maze (MWM). Neurogenesis was also assessed using immunofluorescence staining. Although CORT-treated rats performed on par with vehicle-treated rats during spatial learning of the MWM, cognitive flexibility of the CORT-treated rats was significantly impaired during the first day of reversal training. The probe test revealed enhanced memory retention of the platform location for the CORT-treated rats. Experiment II was similar to Experiment I in all respects, except that injections were stopped 3 days before behavioural assessment. In Experiment II, CORT-treated rats performed better in the spatial learning phase of the MWM, while reversal learning and memory retention in the probe test were no different than control animals. In both Experiment I and II, no difference in the number of newborn neurons between the two groups was observed. These findings suggest that cognitive flexibility is impaired in a CORT-induced animal model of depression, the effect is reversible and seems to be independent of suppressed hippocampal neurogenesis.