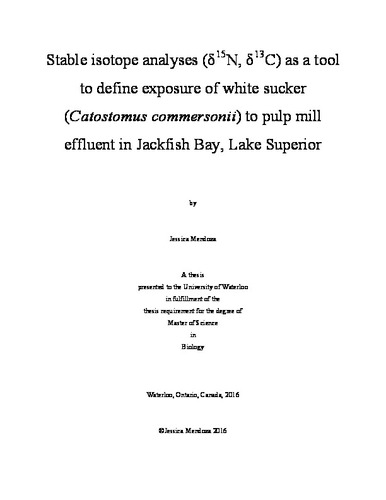 Effects of effluent from the pulp mill in Terrace Bay, Ontario, on fish have been extensively studied since the late 1980s. Fish collected at this site over the past several decades have shown a variety of physiological and population level responses relative to reference sites; however the patterns of stable isotopes in biota at this site have not yet been studied. The purpose of this study was to determine the spatial and temporal variability of stable isotopes of carbon (δ13C) and nitrogen (δ15N) in organisms exposed to pulp mill effluent from Terrace Bay, Ontario into Jackfish Bay, Lake Superior. The sentinel species, white sucker (Catostomus commersonii), was collected at sites with varying exposure to pulp mill effluent during late August of 2011, 2012, and 2013. In addition, white sucker were sampled at two spawning locations in May of 2011, 2012, and 2013. Incidentally, the mill closed operations after sampling in August 2011 and resumed operations after sampling in August 2012, resulting in a temporal change in effluent exposure. Population characteristics, mixed function oxygenase (MFO) induction, and stable isotopes (in liver and muscle tissues) were analyzed for white sucker during spawning in May and gonadal recrudescence in August each year. Stable isotopes were analyzed for macroinvertebrates at similar sites during the fall to track the baseline signatures to determine if there were whole ecosystem changes or only changes within trophic levels. While the mill was operating in 2013, isotopic signatures of white sucker residing in nearby Tunnel Bay (part of Jackfish Bay, Lake Superior) did not differ from Moberly Bay (also part of Jackfish Bay), the bay directly receiving the pulp mill effluent, or Mountain Bay, the reference site. However, isotopic signatures in white sucker collected in these nearshore bays of Lake Superior were significantly different from effluent-free Jackfish Lake, a small shallow inland lake through which fish must migrate to spawn in the spring (Sawmill Creek). Based on isotopic signatures it is possible that up to 23% of fish caught at Sawmill Creek were from Jackfish Lake and therefore not exposed to effluent in Jackfish Bay, Lake Superior. This may have implications for interpretation of future monitoring of fish responses in the spawning population. Unfortunately, fish movements and other factors may limit the use of stable isotopes for separating exposure of fish within Jackfish Bay. Isotopic signatures of liver and muscle tissue of white sucker did not respond consistently to changes in mill operation across the three years of the study. In contrast, isotopic signatures of invertebrates at the exposure sites were depleted in δ15N and enriched in δ13C during mill closure but after the mill reopened became enriched in δ15N and depleted in δ13C. Stable isotopes in macroinvertebrates reflect changes in mill operation better than white sucker as the movement and migration of fish may confound exposure. MFO activity (ethoxy-o-resorufin deethylase (EROD)), another measure of effluent exposure, was induced in fish liver at Moberly Bay and Tunnel Bay compared to the two sites that did not receive pulp mill effluent, Mountain Bay and Jackfish Lake. EROD activity was higher during 2011 when the mill was operating compared to 2012 when the mill was closed, but when the mill operation resumed in 2013 there was a much more extreme induction in EROD than both of the previous years. These results suggest that fish are exposed to chemicals in the effluent that can induce MFO activity and the fish respond quickly to effluent exposure. Spring levels of EROD activity were minimal during all three years, likely a combination of reduced effluent exposure during migration and reproductive physiology of white sucker. MFO activity remains an effective biomarker of exposure to pulp mill effluent but is only reliable in fall sampling of fish. There are indications that white sucker are exposed and respond to pulp mill effluent in this system, but differences in population endpoints (such as gonad somatic indices) are no longer evident between fish from pulp mill exposed sites and reference sites (May or August). A short term removal of continuous exposure to effluent over a year also did not affect population endpoints. Stable isotopes were able to highlight the complexity of effluent exposure in the system but were not a reliable tracer for effluent exposure in white sucker. In conclusion, stable isotopes in macroinvertebrates reflect changes in mill operation better than white sucker, and stable isotopes are more strongly governed by differences in habitat than pulp mill effluents. The use of stable isotopes in macroinvertebrates as sentinel species is ideal since the movement and migration of fish can confound exposure. There is no longer a difference in population effects between pulp mill exposed- and reference fish, which indicates upgrades in mill operations and government regulations have improved effluent quality. MFO activity remains an effective biomarker of pulp mill effluent exposure but is only reliable in fall sampling of fish. Stable isotopes may give an indication of nutrient dynamics amongst trophic levels, but pulp-derived tracers with no confounding environmental factors are desirable to confirm and quantify pulp mill exposure.