Beyond Genius Loci: An Analysis of Architectural Design Strategies of Place 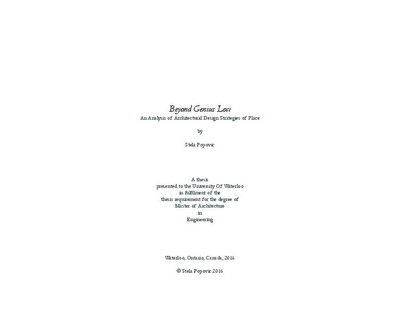 This thesis explores the contributive role of the genius locus, or “spirit of place”, in the identity of cities and the production of meaningful places. The research addresses the analysis of genius loci as historical phenomenon as well as their modern role within suburban landscapes. This thesis argues that an understanding and response to genius loci is vital not only in distinguishing it from concepts such as a sense of place, place-making, and identity, but as a means to further the maturation of suburban design and animate the underlying urban forces that combat generic design. Focusing on the suburban city of Mississauga, urban and architectural failures bring the agency of architecture into question in order to contest architecturally indifferent development. The goal is to offer a design methodology that animates the generative forces of the genius locus in order to achieve a distinct, complex, and grounded urban character. The design intervention embodies Mississauga’s genius locus – an urban simulacrum born from commerce, speculation, and the resistant debris of city growth – into a matrix of architectural and landscape inserts drawn from portions of idealized master plans. It takes into account the role of conscious and unconscious cultural value, collective identity, and environmental influences in order to bridge the gap between the ideal city and the built city.